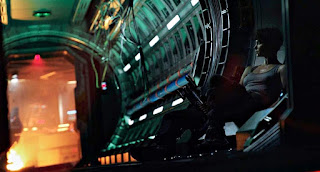 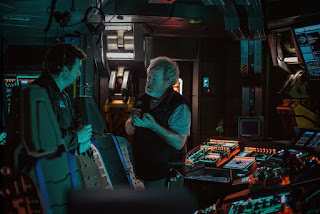 a) 15th July 2016: My Initial thoughts
Since the first photo from the Alien: Covenant film set was shown, because of the variety of colours of the lights featured in the set photos, with a strong orange, yellow, red, green and blue but lacking the purple, the dim lighting seen so far brings me to think about the Gaspar Noé 's bewildering 2010 movie, "Enter The Void" which takes place in a state of reality between death and reincarnation in the manner of the Thibetan Book of the Dead. In the movie, the surrounding city was reimagined as if seen in a state of an hallucination. Marc Caro who co-directed "City of the Lost Children" with Jean-Pierre Jeunet, was the art supervisor for the movie. 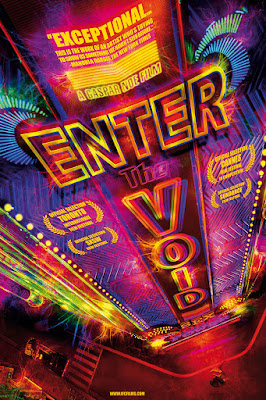 b)  Thoughts about hallucinogens as a theme
One could just consider the lighting from those initial set photos as only a slightly more modern sense of dark lighting than seen in films like Alien, and perhaps some aspect of Blade Runner too which mostly takes place in a dimly lit world. After movies such as Avatar which displayed a world that seemed to follow the theme of an Ayahuasca visionary world, and the popularity of discussion about DMT hallucinations. I might begin to think of this sort of type of concept to vaguely think about in the background if one might have seen something about or remembered Noé's movie. Perhaps loosely this thought works in the way that I wondered if Prometheus asked the ethereal question, partially because of its excessive display of holographic technology perhaps along with the continuous use of ethereal blue lighting, about whether the universe was a hologram.  Hopefully for some of us, watching the film might be another trip for a lesson at mytholology mystery school.

c) Noé experiments with hallucinogens
"Noé had tried various hallucinogens in his youth, and used those experiences as inspiration for the visual style. Later, when the director was already planning the film, he tried the psychoactive brew ayahuasca, in which the active substance is DMT. This was done in the Peruvian jungle, where the brew is legal due to its traditional use as an entheogen. Noé described the experience as very intense, and said he regarded it "almost like professional research." Since few on the design team had ever taken a hallucinogen, it was necessary for Noé to collect and provide visual references in the forms of paintings, photographs, music videos, and excerpts from films. One reference used was the works of biologist Ernst Haeckel, whose drawings influenced the organic patterns seen during Oscar's visions." (Source: https://en.wikipedia.org/wiki/Enter_the_Void)