Alien Covenant: David the android as a Barry Lyndon?

For a while I was looking for a film that was near enough at the core of Alien Covenant in the way that I came to realise that Lars Von Trier's Element of Crime with its Tarkovsky, Blade Runner and Apocalypse Now associations and various strange bits if imagery was at the core of Alien 3.

Alien Covenant seems a bit of an abstract movie in the way it's edited together. Well, it's not so much a core , but there are some things to discuss in relation to David's character in Alien Covenant

We do know from the Prometheus interviews and the film that Lawrence of Arabia was something sort about with David watching the movie and bleach his hair to a similar colour as Peter O'Toole's in the movie and quoting the film slightly later.

There is something more to explore there, but what other directions might Ridley have been taking such a move.

I did see the new Stanley Kubrick exhibition the other week, I looked at the storyboards for the movie Barry Lyndon which was based on the novel "The Luck of Barry Lyndon" by William Makepeace Thackeray.

I suddenly had the idea out of the blue there that this film had something to do with Alien Covenant.

When the blu-ray came out, I bought and watched it, and now I have settled on that idea which as with many things floats in the air.

One thing to take notice of is the fact that Ridley is a Kubrick fan, it might be good to reason with it

b) Kiss
There are scenes where men platonically kiss mouth to mouth in the movie, such as Captain Grogan asked “Kiss me, me boy, for we'll never meet again” as he lays dying,  and it could easily be assumed to be a normal custom of the time rather than a sign of homosexuality.

Of course the scene looked awkward by 20th Century points of view as the audience wondered what was going on.


Then there is also a scene where Bullingdon the stepson of Barry Lyndon refuses to kiss his seated stepfather, and it's here that it seems as if the boy had declared war on Barry, although in the book it's Bullingdon's refusal to shake Barry's hand and acknowledge him as his father.

Barry takes the boy into another room to whip him.

For more information about this scene, see http://idyllopuspress.com/idyllopus/film/bl_five.htm 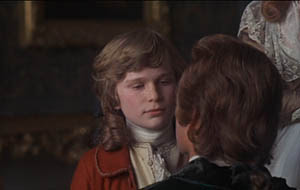 There is a scene Walter confronts David , asking him who wrote Ozymandias, and David gives the wrong answer and Walter tells him,  but rather than have to admit that his own computer brain is out of tune, David appears to be trying to seduce Walter.

David suddenly says to "Walter, When you close your eyes do you dream of me?"

Walter reveals "I don't dream at all"

David then stated "No one understands the lonely perfection of my dreams, I've found perfection here, I've created it. Perfect organism"

David continues "No one will every love you like I do"

It didn't look as if Walter was really programmed to handle David or recognise what he was about to do, leaving himself off guard.

With that David kisses Walter who remains unresponsive, and then does something that suddenly shuts Walter down as if painfully, and the body is seen sitting on the floor with the head slumped down before David pulls out a cord from his neck, uttering the words "You're such a disappointment to me"

So thinking about Barry Lyndon help to give a perspective on what the David kissing Walter scene might be about in a Ridley Scott movie and the fighting with his own family member, there might be another movie to consider but on the other hand the flute was introduced into John Logan's version of the script.

It also ties in with perhaps how in Ridley Scott's Blade Runner when Roy Batty kisses Eldon Tyrell on the mouth, and Tyrell is his make and one might wonder what that was all about.

We find at the end of Alien Covenant that David leaves the Engineer's planet under the guise of Walter.

We would have noticed that as soon as the Covenant party were taken to the citadel David started cutting his hair and soon was indistinguishable from Walter.

We hoped that Walter has destroyed destroyed David in their fight, but then once David gets to the Covenant, we start to realise that it's him,

He has even gone as far as removing one of his hands because Walter lost a hand fighting against the Neomorph, and fully he reveals himself to be David to Daniels as she is about to go into hibernation, when she expects him to say something that only Walter would know, but David did not.

I might even want to somehow imagine that David loaded his own program into Walter and took over his body, that Walter is still somewhere in the circuitry waiting to reclaim it, and perhaps that should be considered very unlikely. Perhaps Walter is still on the planet, slowly repairing himself. I don't ultimately know.


e) Thoughts about the casting of lead actors

I like to think that Ridley might have thought about the Barry Lyndon character being Irish, with Michael Fassbender being half Irish and both of Fassbender and Ryan O'Neil at the time being tough looking "pretty boys" as actors. So there's David the android following a ruinous path attempting to get somewhere in life and of course where could one go from there?