a) Just a note for Alien enthusiasts, a book (bookazine) called Alien Origins, Hemlock's Horror Companion is on sale, perhaps much of the book covers familiar ground but the writer appears to own a copy of the Alien script with the "alien city" in it which appears to be one of those rare items that people in the Alien completist community want to read and he uses chunks from the script to show stages in the script's evolution. Yes, I'd love a copy of that script myself.

b) It is a nicely written book by someone who obviously enjoyed the subject and the various detailed bits of information associated with it. I'll be digging further into the book as time goes by.

d) The writer makes a statement that Giger's art was partially a result of his use of opium which is something that everyone would like to jump onto the bandwagon with the usual headlines that people want to write about him. I managed to pull up the fact from something that Stanislav Grof said, that Giger actually took medically prescribed opium for his depression. 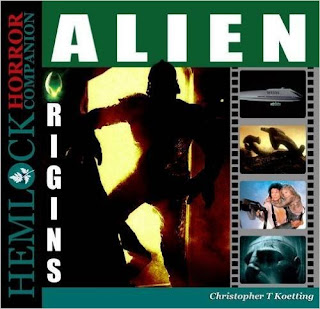