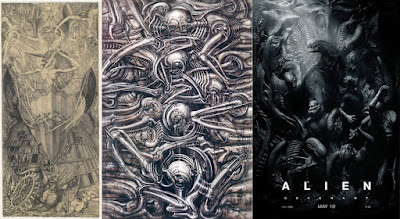 b) Similarities
I had decided on the day that the Alien Covenant poster came out that it referenced Giger's painting Biomechanical Landscape (work 312) when noticing a vague similarity in the layout and some of the structures.

Then I looked back at my realisations about how Giger's painting referenced Ernst Fuchs' Triumph of the Sphinx and then realised that the poster artist may have found out about the Fuchs painting and decided to reference some details.

Perhaps that the artist who made the poster read my blog or something that I posted on Facebook or Twitter, if not was informed by someone who was a member of Giger's personal circle of friends who somehow found out about the connection or was there was some other way.
But still the fact that the Giger painting and this specific Fuchs painting has been my very isolated theory, and then one might push forwards also with the argument that these things are bound to show up in a number of paintings and it's slightly coincidental, while the connection between the Giger painting and Fuchs piece of artwork is due to Giger's well known appreciation of Fuchs and the fact that the structure of the painting had sunk into him and he found another way to express it.


c) Hand gestures and arm formations
The Alien Covenant poster has the various humanoid arms stretched across it, slightly like the Giger painting, held out as if they're loosely interacting., but much more human than that.

Going back to the Fuchs painting, there are the humanoid limbs in forms much more similar to the Alien Covenant poster

Perhaps there are a good number of paintings where the figures are holding their arms out to each other, an arm is an arm and when people are seeing with arms reaching out in crowds, there might form aesthetically or symbolically pleasing patterns in people's artwork, but connecting the Giger and the Fuchs painting makes the connection a bit more specific.

It has it's place in Giger's painting similar enough in the way I compared that to the Alien Covenant poster but the way it the film poster connects with Fuchs seems to be slightly more specific and its as if the artists has taken elements from the two paintings in a way that Giger would do when looking for ideas by comparing paintings with a connection, perhaps one referenced the other and so the next artist might combine the two.

The bottom of the curved floating wall behind the top humanoid form, has ribbing beneath.

At a glance, in the low resolution image, the underside resembled floating ribbons that looks roughly like tapes of film either side of the human body, comes through as a tentacle in Giger's painting and which turns into an arm of the main central alien beast in the poster,

Meanwhile the bottom of the wall becomes  transformed into biomechanic patterns in the poster behind the main central alien.