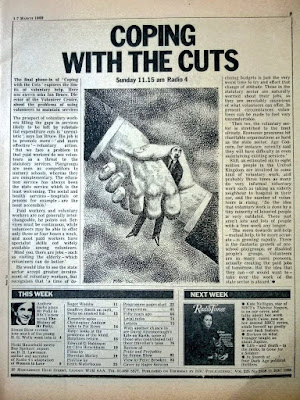 a) Okay, looking through posted images from issues of Radio Times, 1st -7th of March 1980 has an image to do with an article about budget cuts by Peter Till.

The idea that Giger got to see it and used it in some way strikes me, and that he decided to make the digits of the hands into other things.

b) It might not be the image that everyone would have been talking about at the time, but it was an editorial image for Radio Times which was in the past a magazine for a British TV channel in a time when there were not many and Giger appears to have been happy to make use of all kinds of illustrations from it as reference material for his paintings.

Peter Till has been a significant illustrator over the years, working mainly as an editorial illustrator.

c) Matching it up with his paintings since that time, looking at The Net I & II from 1987 and 1988, I think that he referenced this radio times image and turned the fingers into buttocks and the thumb into a legs.