Mythical mysteries and "Quatermass And The Pit"

leading from
Quatermass And The Pit
and
The Henu Barque trail through the 20th century.

a) Summary plot of Quatermass And The Pit
Nigel Kneale had written Quatermass and the Pit as a TV series for the BBC that aired at the end of 1958. It starred André Morrell as rocket scientist Professor Quatermass, Cec Linder (well known in the role of Felix in the Bond movie Goldfinger) as paleontologist Dr Matthew Roney and Christine Finn (later the voice of Tin-Tin Kyrano in Thunderbirds) as Roney's assistant Barbara Judd.

Builders digging the foundations for a building in Knightsbridge uncover a fossil of a humanoid skull that dates back five million years. Dr Roney in his archeological dig at a building site uncover something that they imagine to be a world war II bomb, but the truth reveals itself that it was the remains of an ancient spacecraft that delivered the genetically altered ape men to Earth and has sunk in the marshlands.
b) Questions about the design of the Martians
The cadavers of the extra-terrestrials were discovered in a state of perfect preservation in the cockpit, large creatures partly insect and partly crustacean.

They resembled locusts with devilish faces and had three legs each.

The body had been inspired by a painting of a lobster by Bryan Kneale brother of Nigel Kneale and then Nigel Kneale decided to go for Martians with three legs since it hadn't been done before , one might make the claim that it was the obvious thing to do in light of War of the Worlds, that featured Martians in war machines that walked around on three legs, but the other more mystifying side to this was that fact that Nigel Kneale originated from the Isle of Man and their national symbol which appears on their flag, was "the three legs of Mann" a triskelion of three legs conjoined at the thigh, a symbol of unknown origin.

Nigel Kneale when asked about it wasn't actually able to precisely say whether it was because of the triskelion or not when he was later asked about it. 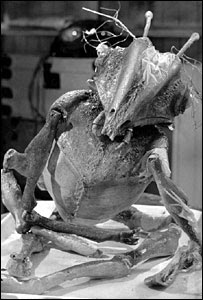 c) Lobster like painting over the mantel piece?
However when Jack Kine came up with the design which, oddly enough formed in his mind after seeing a painting by Nigel Kneale's brother, the artists Bryan Kneale.

It was enough to stimulate Jack's imagination and after discussing the design with Tom - who had wanted his Martians to look exactly like that anyway - he worked on a series of sketches that would become the aliens.

Made in fibre glass they were almost as famous in their day as the Daleks were to become later on.

They weren't required to walk thank heaven, because the tripod leg arrangement would have presented Jack and Bernard with enormous difficulty.

Later in the movie version, the script was rewritten to have the ancient spacecraft discovered underground through the wall of a tube station ticket hall.

The film version that was much more available to be seen by the public inspired Dan O'Bannon when he wrote the Alien script and also Ridley Scott when he made Prometheus, and it looked as if when he was formulating his ideas earlier on he was thinking along the lines of the revelations in the film

Ridley was inspired by the idea of how they were able to film buried ancestral memories from Mars that showed the insect race culling their own population, the fact that you could only barely see these alien forms but got a general impression and so decided to have in Prometheus a recording device within the pyramid complex that would replay the Engineers last moments as a hologram. 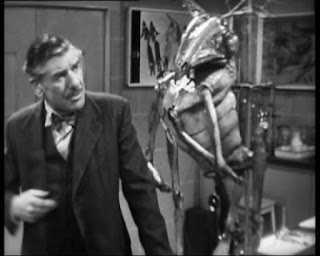 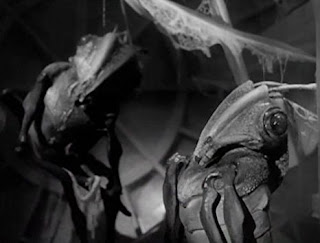 d) Three legged martian references the Henu Barque?
A curious question comes to the surface about whether the martians cadavers were somehow based on the Henu Barque/Sokar Funerary Barque from the Papyrus of Ani.

Another point, the barque has three rudders at the prow and perhaps in some way that inspires the creature shop to think it appropriate to give it three upper limbs, separate from the legs

However this doesn't even come close to what Bernard Wilkie has said, but there's enough here to say that mysteriously it echoes the Henu Barque once again.

That might mean while the buried spacecraft in the story has been buried in the ground for around five million years, it becomes in a sense another "boat of a million years" as sailed, by Ra the Egyptian sun god, along the river of the sky through the heavens and the world of the night.