Sheridan/Mondoshawan concept for Luc Besson's
"The Fifth Element" by Patrice Garcia (1992) echoes the Space Jockey and foresees the Engineer flight suit from Prometheus? 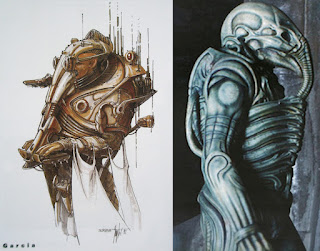 Leading from
Prometheus: The "Space Jockey as a suit" question
and
The Fifth Element
and
Alien Echoes

a) During the development of Luc Besson's Fifth Element, for the benevolant space faring race known as the Mondoshawans, also known as the Sheridans, Patrice Garcia provided a concept design for one of the entities, that roughly resembled the Space Jockey in that it had a large upper body shell and a helmet with a trunk like proboscis. Inside appeared to be a humanoid being.

b) The final design would look very different but would still connect with the Egyptian symbology that the space jockey and seat provided.

c) Looking at Ridley Scott's film Prometheus years later, in which a civilisation known as the Engineers would be seen dressed up in suits designed to loosely resemble the space jockey from the original Alien , one might ask if there is a connection here and if Ridley Scott had seen the concept art book since he was a fan of Moebius who worked on the film and worked also with Sylvain Despretz who also worked on the film