The Henu Barque trail in Medieval to Renaissance paintings
incorporating?

Leading from
The Henu Barque trail

a) The trail that runs through St Catherine's Monastery in Sinai, Egypt

What can be said, one of the earliest pieces of artwork which appears to secretly incorporate the Henu Barque appears to have been created around the 7th Century at the Monastery of St. Catherine in Egypt which was built by order of Emperor Justinian I (reigned 527-565) during the Roman occupation of parts of Egypt lasting until 641 and is believed to enshrine the burning bush from which God first revealed himself to Moses.

That might be a clue about how it was introduced into Western art and perhaps it came out of same need for early Christian artists to adapt early Roman motifs to give new meaning to what had been pagan mythology.

Perhaps because of the compositional possibilities that it offered the Henu Barque would become an interesting template that would catch on, often being used for mosaics and paintings of the resurrection of Christ for hundreds of years to come.


This group of paintings appears to reference a Henu Barque of the same type as that found on the Papyrus of Ani, and not much about that papyrus is known before it was stolen from an Egyptian museum and given to the British Museum, other than it was found in the tomb of Anu.

If it wasn't from his papyrus, perhaps there is another papyrus somewhere with a depiction of the Henu Barque created in near enough the same way.

Once modern Western artists came to learn about the Egyptian book of the dead and how to translate Egyptian hieroglyphs around the nineteenth century, they would have been able to appreciate the Henu Barque more as something with a mythological and symbolic value.

j) Comparison to The Lamentation (1455-60) by Petrus Christus


k) See: "The Resurrection" from a tryptich at the Ducal palace in Urbino (15th Century)

l) Resurrection (second half of 15th century) by Hans Memling

r) See: The demon sitting on a high chair from The Garden of Earth Delights (1503-1515) by Hieronymus Bosch references the Henu Barque?


t) See: "Jesus among the Doctors" (1506) by Albrecht_Dürer references he Henu Barque?

u) The Witches Rout (Lo Stregozzo), ) by Marcantonio Raimondi and Agostino Veneziano from around 1520. 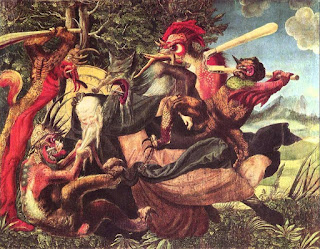