Egyptian Mysteries: Star Map fresco from The Tomb of Pharaoh Seti I


a) On 24th July 2017, I see an image of the Egyptian Deity Tawaret from the Tomb of Seti I on the internet, it's an image that I am very familiar with but suddenly I make a connection with Giger's Passage Temple Entrance. I soon find other elements in common and then realise that the mural is a Starmap

The lion or hippo humanoid's belly, shoulder and breast are transformed into a leg with raised knee.

Perhaps here snout s merged with the legs of a horizontal human being in front of it.

The crocodile becomes transformed into an indescribable creature that has inherited the long main of  the lion-hippo, while its bony scales on the back of the neck transforming into worms that stick out, 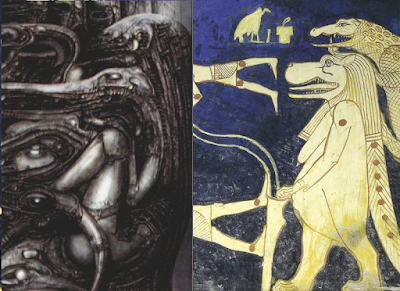 The bull's horns suddenly become inverted and enlarge, and surround what resembles a warped face 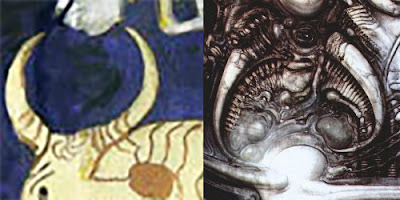 c) Linked still to a Fisher Price toy
Earlier I had decided that the two figures are translations of the Jack and the Beanstalk character on the Fisher Price Cot Activity Centre .

While I don't have the idea that the Fisher Price toy designer had any particular thought about the the mural, it's possible that Giger made a connection between the forms of the Tawaret mural image and the Jack and the Bean Stalk character and so decided to incorporate something based on the Tawaret form because of this.

Also, the warped face between the pincers that are based on the horns, remains as the warped Humpty Dumpty face from the same toy.