Alien: Cocoon scene by way of The Adventures of Tintin: Tintin in Tibet 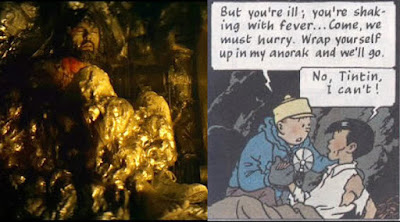 Leading from:
Alien: Development by way of Tintin


a) Having made the connection with the original Alien beast and the beast of Black Island which turned out to be a gorilla, the Alien might also could with the Yeti character from Herge's Tintin In Tibet.

In Alien, no one tried any similar methods to frighten the alien beast.

b) In this Tintin In Tibet story, the Yeti known in Tibet as the Migou, is at large, and has recently killed a yak. The locals tell Tintin and Captain Haddock that the Migou will kill them.

The Yeti find the character Chang in the snow after a plane crash, and in its own attempt to help Chang, it takes him to its lair in a cave and Tintin later discovers the cave and finds his friend Chang with his shirt shredded and a blanket over his legs.

Tintin wants to take him back but Chang says that he can't since he has no strength to move and of course the Yeti was likely to return. 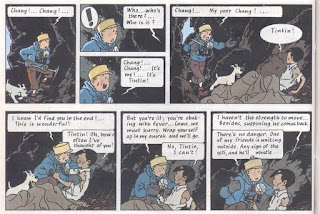 c) Following the idea that Dan adapted elements from Tintin stories for the basis of some of his Alien story, I think that it's possible that this becomes transformed into the scene of the discovery of a crew member cocooned in the alien's nest.

Here we find that both that the Yeti has taken someone to their layers, the person is found but unable to move but there's an excuse to find a human still alive with something else to say, but O'Bannon's story takes the dark path and human victim isn't be able to be carried away to recover so something else must be done.

However, while Chang would be rescued, Standard had different reasons for not being rescuable could not be changed and he had to be killed by Roby with a flame thrower.