Alien: The "ancient mechanism" in the Pink Sphinx's mouth, the death of Brett and the mystery of the alien beast's tongue

leading from
Alien : Jewel associations
and
The Pink Panther comic book #4 (January, 1972)
a) Collecting stories to do with Jewels
My idea is that Dan O'Bannon went trawling through any stories based upon reality such as the Hope diamond curse and stories that are fiction, some in big movies, that he found that had connections with jewels that might show off weird human behaviour or perceptions, and used them for ideas.
Perhaps someone had already collected these stories before hand and shared them with the likes of him.
Now today I am busy looking through movies for such jewel assocations because of this and do find such things in some interesting new films.
b) Curious themes in "Pink Sphinx"
This is what suddenly drew me to look at the Pink Panther comic book story "Pink Sphinx" because it's about discovering ancient jewels.
Besides what one could do with the Pink Panther riding on a camel as if it were a ship of the desert, this story shows an encounter between the Pink Panther and a curious giant pink sphinx with an "ancient mechanism" within the mouth that activated by the Pink Panther's cry of "yeeow!!" opens up and spills the jewels.
c) Connecting to Brett's death
I think that it inspired elements of Brett's death in the film that I think already connects with ideas from the Tintin story The Pharoah's Cigars but here we have the Pink Panther becoming isolated as he's drawn to the sphinx and suddenly opening its mouth, there we have the jewels spilling out and this mysterious mention of the "ancient mechanism" which sounds interesting if you take it out of context. 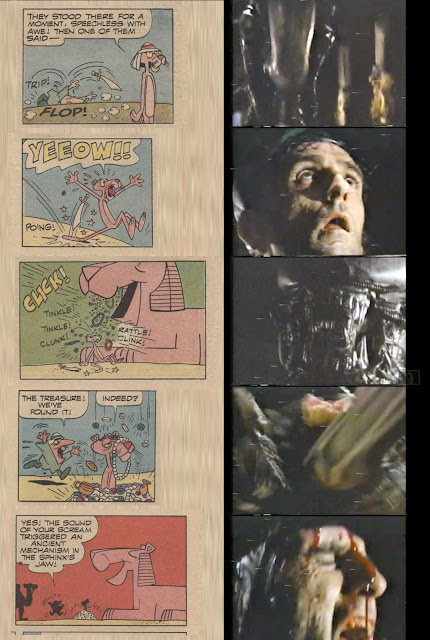 d) Mysteries of the "ancient mechanism" in the mouth
I had been looking at the tongue of the Alien in the various designs by Giger. The earlier version was a far cry from the final design of the thing, but to me it always looked like some sort of ancient mechanical tool that had a secret function to it or even a secret use.
Jokingly I thought it might have been some sort of ancient thing that had was older than the alien itself but was handed down through the DNA in some strange way
The earliy version of this tongue might even have looked like an Egyptian brain scooping device for the mummification ritual. Then it became slightly weirder but still might have been a brain scooping device.
Perhaps the the hand that comes out of one of the coffin banks with a ghostly hand that reaches out for the coin might have felt like something similar
Whatever the case it was a ritual device of some kind was replaced with box like device that came out with an inner set of teeth and that wasn't quite what Giger wanted for the beast.
But still it looked like a strange unfolding biomechanical tool that basically removed the victim's brains whatever.
So if Giger read or was told about about the "ancient mechanism" in the mouth of this Pink Sphinx, one could look at that in the Pink Panther story as the alien beast from an ancient background and then have other thoughts about somethign it might do to kill Brett
So in an attempt to have interesting ideas, I would like to think that phrase ought to have set Giger off and so we are presented with a mysterious ancient mechanical thing coming out out of the mouth.
Posted by wmmvrrvrrmm