leading from
The Pink Panther Comic Book Trail
a) Cover of The Pink Panther  #4
I suspsect that the cover references both the painting "Femme-Cheval" (1948) by Wifredo Lam and a photo of JG Ballard taken around 1969 to 1970 by Jannick Storm for : Issue #1 of Jannick Storm's J.G. Ballard newsletter, Limbo, and this photo curiously resembles in  some way Jean Delville's Treasures of Satan.
b) Portrait photo of JG Ballard via Pink Panther #4 cover
So this cover in relation to the JG Ballard would become a starting point for some, with I think that Peter Andrew Jones referenced the cover in his cover for Roger Zelazny's "Today We Choose" in 1973
Then Salvador Dali had a go with a take on the cover  in 1974 with his Papillon de l’anti-matière (Série du Cosmos), and steering in that direction, Jack Kirby drew a panel in The Eternals #7 (published January 1977, showing Gammenon the Celestial returning with his rod of "Life Seed" capsules which Jemian the Celestial analyzes in their hemispherical dome (January, 1977).
HR Giger would base a sketch on the space jockey corpse in the landscape partially taking this trail of connections  in 1978 and then pick up the trail before the end of the year again in his painting Alien Monster IV. (work 408) (1978). Much later in 2006, Moebius drew the "Little Bouddha" unused illustration for FNAC that looks to me if it's consistant with this trail.
c) Femme-Cheval (1948) by Wifredo Lam, via the Pink Panther #4 cover
Meanwhile Chris Foss created the Leto's Car by (1975) for Jodorowsky's Dune. which I think references Femme-Cheval (1948) by Wifredo Lam, via the Pink Panther cover 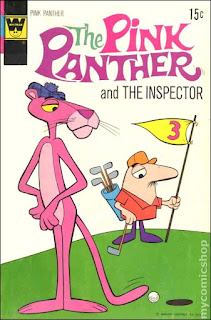 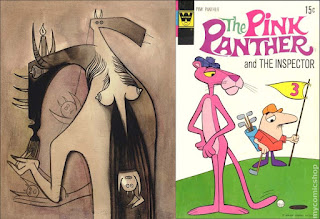 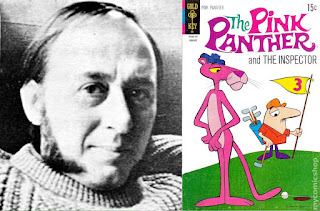 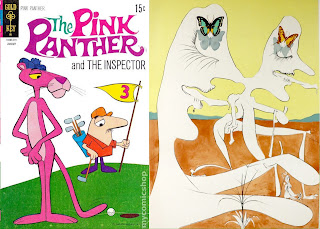 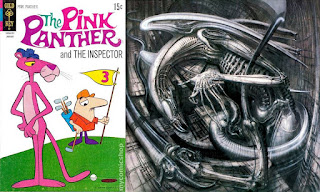 e) Cover referenced in in Cover art for Roger Zelazny's "Today We Choose Faces" (1973) by Peter Andrew Jones? (to come) 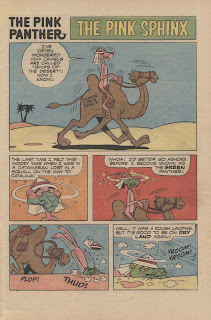 g.ii) See:  Panel from "The Pink Sphinx" from Pink Panther #4 (Published Jan 1972) showing the Pink Panther riding on a camel as a "ship of the desert"? 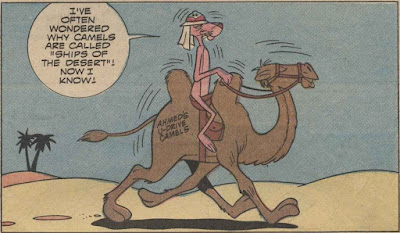 g.iii) See: Alien: The "ancient mechanism" in the Pink Sphinx's mouth, the death of Brett and the mystery of the alien beast's tongue