The Pink Panther and The Inspector #3 references Soft Self-Portrait with Fried Bacon (1941) by Salvador Dali and poster for Bauhaus exhibition from 1923? 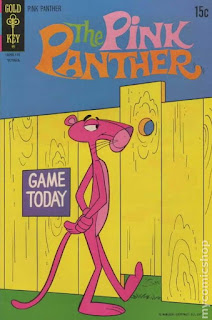 a.i) The idea is that I decided that this comic book cover referenced a Bahaus poster for the Weimer Gallery from 1923, but there was obviously more going on in this work and then later I decided that it referenced Soft Self-Portrait with Fried Bacon (1941) by Salvador Dali which I thought also referenced the same Bauhaus poster, as if the Pink Panther illustrator was aware of how one thing related to another.

At present I am looking to make sure that I have an image of the original version of this Bauhaus poster or even if there is an original one at all, because there is a version making the rounds with slight alterations such as a red outline of a rectangle around the Weimer Gallery wording, which was created in 2016 that's making the rounds as the Bauhaus wording, and there is no name for the original poster but there is for the new version.

There are a selection of different posters for the exhibition in 1923 that often seemed to reference another painting from an earlier period, perhaps giving the posters a sense of underlying symbolism for those interested in it.

b) Cover references Bauhaus poster from 1923

b.i)  The Pink Panther illustration would here basicly make a joke about the Bauhaus poster envisioning a wooden fence with loose plans. The Rectangle with the Weimer Gallery wording would establish the idea of these plans, while the U above and A with half of another U beneath would become a joke about pushing the plank up with a toe so that the panther could see through the hole and watch the game being place 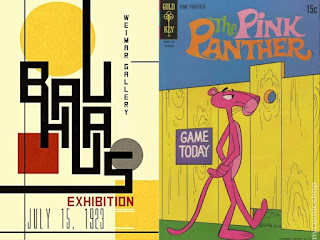 b. ii) The second U going up under the second A becomes the pink Panther's foot pushing up the plank in the fence. 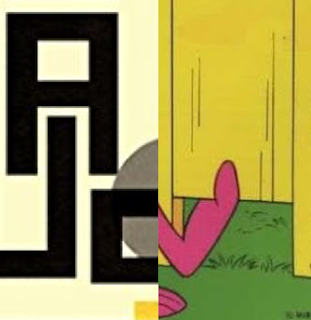 b.iii) The red square would become the game today sign 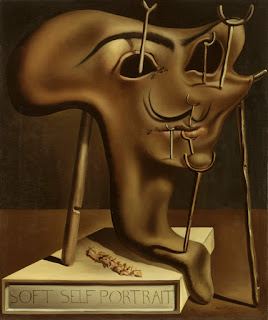 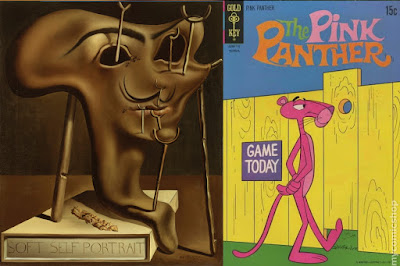 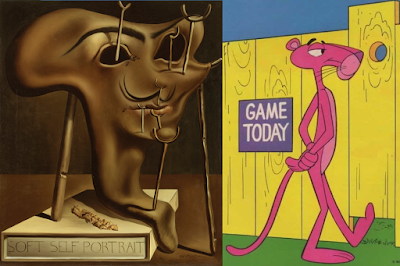 The right eye hole becomes the hole in the fence

c.v) Perhaps the support on the left becomes the tail of the panther while the bottom of the slant of the left side of the plinth becomes the end of the tail, while the neck and hanging flesh in the self portrait at the bottom on the right becomes the direction of the position of his legs

d) Well this might all seem very fine but how do the Bauhaus poster and the Dali painting relate to one another? (to come)