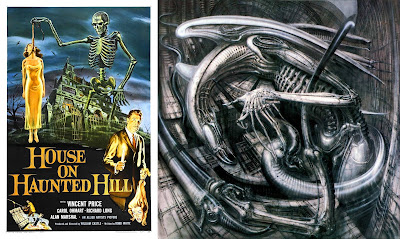 
a) The gate with building and general presence of a skeleton in the wonderfully macabre poster for "House on The Haunted Hill" (1959) transforms into the upper curve of the biomechanoid's hand and other features.

It becomes also as if the skeleton and the woman's hanging corpse have merged into one creature with the woman's corpse becoming the serpentine head.

In the way that I earlier pointed out that the hand could be considered a merger between the Balrog's hand and many thonged whip or even the legs of a daddy longlegs from Dali's "Daddy Longlegs of the evening - Hope!"

It could even be loosely the skeleton's own hand merged with the single rope it's holding, although here the hand's fingers are the transformed bars of the open gate.


Perhaps the candle held by the Vincent Price character is echoed in the presence of the glow worm sticking out of a hole in a blade which I have earlier on compared to the lit staff of Gandalf. 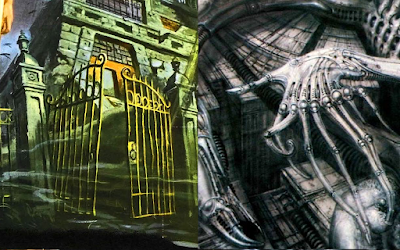 b) Perhaps Giger saw a similarity between the film poster and Dali's painting "Daddy Longlegs of the Evening -Hope!" and thus was able to perceive it as one of the many paintings connected with Treasures of Satan, as many surrealist paintings were.

The violin becomes the hanging head in the right corner, with the candle becoming the bow.

The tree becomes the skeleton.

The area with the angel , horse and drooping flower petals with red stamen become the hanging woman.

The legs of the Vincent Price character are cut off at generally the same angle as the the low wall on the bottom right.

We might consider the golden yellows used in the poster as being inspired by the golden yellow face in Dali's painting and generally they use the same selection of colours with the red of the flower stamen being used for Vince Price character's tie.