leading from
The treasures of Satan trail through the 1940s 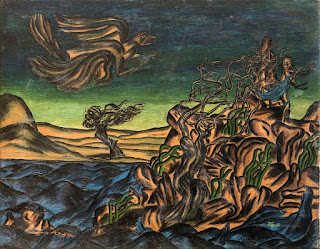 b.i) Appears to reference "A battery shelled" (1919) by Wyndham Lewis, and if that is the case, the two upper heads of the men on the left, and the hand become the flying beast.

b.ii) Having said this on 21st February 2017, looking back on 12th June 2017, it's hard to make a comparisons other than seeing the elaborate landscape transforming into this elaborate rock and perhaps the trails of smoke on the middle left transforming into the tree with the top being blow by the wind in Girl and the Beast

b.iii) However considering the general choice of colours and the elaborate nature of the island, I am sticking with my idea.


c. ) Hands from Dürer's "Jesus among the Doctors" from 1506
Having said that, one could compare the unity of the heads, (with the peak of the top right cape becoming the top right hand's pointy finger ) and the giant bird to the hands from a Dürer painting "Jesus among the Doctors" from 1506, which has been another focal point for these Surrealist transformations. It would not be out of the question to even connect the soldiers in dark clothing from Battery Shelled to the hands 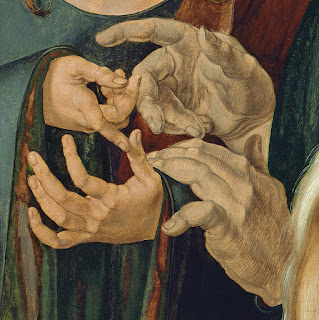