leading from
The Henu Barque trail through the 20th century.
and
The Jacques Louis David's "Death of Socrates" passage 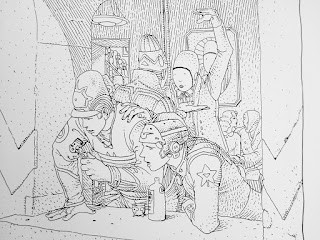 
b) In comparison to the Henu Barque in terms of the composition structure:

The three sections of white piles of sand becomes three heads, one of the hat wearer standing up, another the head of the person with the raised hand, and the third is the head in the picture on the wall.

The frill around the upper kestrel head becomes the lines emanating from the head in the picture on the wall.

The slope of the boat leading up to the oryx head becomes the staircase in the background.

Presumably the three rudders become the seated couple on the far right, but perhaps I would like to imagine that they have become the three buttons on the jacket of the person with the raised hand.

Crouching man's skirt turns into the details on the sleeves of the lower left man in Moebius' illustration.

Perhaps there are other possible comparisons to make. such as, one could say that the upper kestrel head with the frill around it became the lampshade, and that the oryx horns became the curved shadow in the window opening, but the points of comparison between this illustration and the Henu Barque is only rough, because Moebius would have just used the Henu Barque configuration as something to use to create an interesting image, and he would be free to displace things rather than make everything perfect as a Henu Barque. 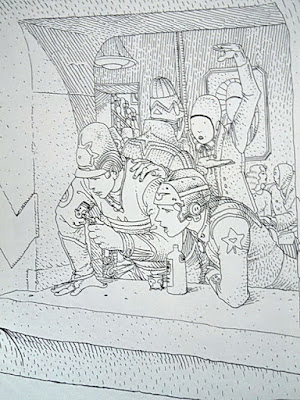 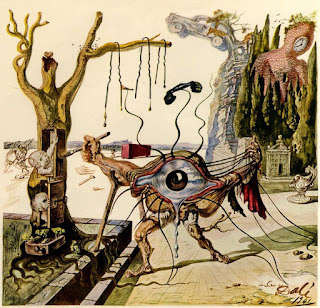 e.i) The background goes through a doorway into the distance on the left in both.
e.ii) Thus I would think that the back of the chair transforms into the back of the man with his face away from the window while the arm and the seat of the chair turns into the left man leaning on the windowsill, but one could also say that the person plucking the turkey becomes the same latter man.

e.iii) The person standing on the right with his arm raised has three buttons on his jacket as does the person with a raise arm.
e.iv) I would say that the pipes on the right perhaps becomes the frame of the portrait on the wall because of the overlapping head of someone with a three buttoned jacket in both.
e.v) See also: E.L. Kirchner's "Studio of Painter" (1929) references the Papyrus of Ani's Henu Barque? 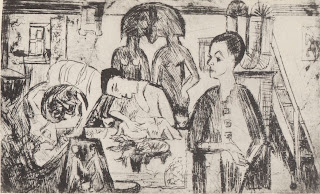 f) See: References Death of Socrates by (1787) by Jacques-Louis David? (to come) 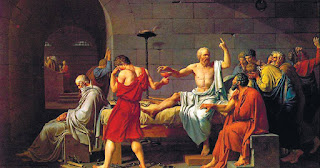 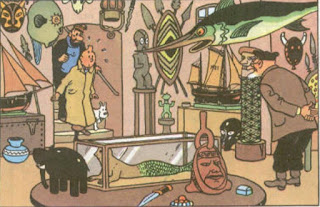