Prometheus : Coming of an Alien Prequel

leading from
Prometheus: Return of the Space Jockey
(Still collating)


a) Several years after Alien Resurrection, Ridley went back to Fox surprised that the following three sequels had never asked four questions that he had in mind.
1. What was the ship?
2. Who was the pilot,
3. The hold had eggs in it,  what were the eggs? They looked like a cargo.
4. And what was the creature? Who would create such a monster and for what reason,
He told them "You know, I can revive this, revitalise the whole idea of Alien because we can not waste him, he's too important not to answer questions about who, why. for what purpose and why"

b) See also: The doorway to the next chapter

c) April 2009
The revelation came that Ridley Scott was toying around with the idea of doing an Alien prequel. In May it was unveiled that he would act as producer with his brother Tony and Michael Costigan. However his protege Carl Rinsch would helm the movie.

Rinsch was a member of Ridley Scott associates, Tony considered him one of the family. It might have caused some concern at the time because he hadn't actually made a full length film before, but he was a top video and commercial director for the company who was also known to be romantically involved with Ridley's daughter Jordan.

The idea was to do two prequels and this would lead to first Alien film, but at the time getting one film out was enough on Ridley's mind.

Fox appeared to want Ridley to direct the film instead of an untried film maker and soon he was persuaded.


d) April 2010
They had written the fourth draft , they would film in 3D since it was an exciting thing to do in light of the success of James Cameron's Avatar.


e) December 1st of 2011
Tom Roth is brought to comment on the release of the Prometheus trailer saying that it was unfair. 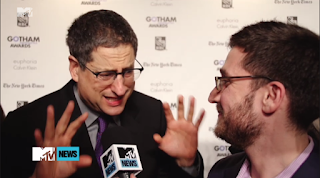