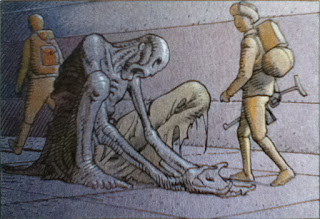 a) Moebius "La Planete Encore.." (translated as The Planet Once More?) was first published in 1990, exploring the worlds of Stel and Atan characters as seen earlier published Le Monde d'Edena.

In this story: "While stationed aboard the Orion R-2R rocket ship with Stel, Atan is left feeling uneasy dure to a telepathic intrusion. Determined to come to grips with the situation, the two set off in search of the signal's origin. Around the bend of a canyon they discover a temple where all life is in suspended animation, as if frozen by some unknown evil. The planet seems to be awaiting its rebirth " (The Art of Edena, Moebius, Dark Horse 2018)

The spaceship interior shown has a grubby interior perhaps reminiscent of the Nostromo from Ridley Scott's Alien.

b) Perhaps generally speaking this is similar to the idea of Alien Covenant where Tennessee, outside the confines of the Covenant spaceship while off to repair the solar rnergy recharge sails picks up a stray holographic transmission sent out by Elizabeth Shaw, and this leads the crew to look for the source of the transmission on a mysterious planet,

After discovering the source, events lead the crew to be taken by David to the strange mysterious city of the engineers where the city dwellers mummified remains fill the plaza, some still standing as in the moment of their death.


c) In Moebius's story the characters reach the strange building that's the base of a giant statue on the planet. The inhabitants are standing in suspended animation looking as if they are zombies.

In Alien Covenant, in combination with numerous other ideas, I suppose, these became the corpses of the Engineers in the plaza, some of which were still near enough upright, but they appear to have been mummified by the black goo that the android David unleashed onto them.


d) Inside they actually pass a dried out corpse of one of the large inhabitants as well as a skeleton. The dried out corpse is even more suggestive of the concept of the dead mummified Engineers in the plaza.


e) Exploring the building further they soon reach a chamber with a row of sculptures on either side, and I think that this room may as well have become the Hall of Heads in Alien Covenant

f) They soon reach a chamber with a row of sculptures on either side, and I think that this room may as well have become the Hall of Heads in Alien Covenant, and here Moebius direction of the story goes off in a completely different direction which I haven't included.