a) Louis Jourdan starring in "Count Dracula" ( For the 22nd of December 1977, Radio Times)Photograph by John Timbers

The connections between the Dali painting and the photo are perhaps only very vague at the most if they exist at all, but the fact that someone involved in the Radio Times had a go despite not really being able to do much since the ruins couldn't be moved around to make it more like the painting.  The wall with holes opening out to the sky become the windows and the absence of a roof. Vagues suggestions of a human character dominating the centre of Dali's painting becomes Count Dracula himself

At least it worked as a photographic composition and perhaps those ruins do become Dracula's wings. Perhaps there's something to consider in the way that the words Atomica and Melancholica, like Dracula, end with the letter A

c) Some details to almost note

The pale blue face becomes Dracula's pink face. the space between the nose of the aircraft and the a engines become the fingers of his left hand, the crutch on the left becomes a narrow window.

In the painting as a whole, the bulbous pillar on the right would become narrow windows of the ruin 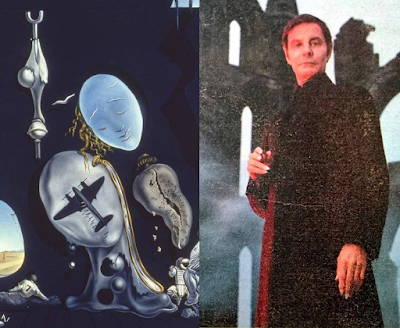