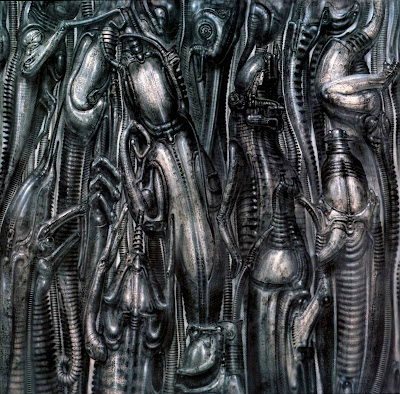 a.i) On 26th December 2018, on  Graeme Wood's Twitter page (https://twitter.com/woodg3), I discovered a photo from an old Radio Times from Christmas 1977 of Louis Jourdan as Dracula for a TV film, and this would have been something that would have been of interest to HR Giger when he came into contact with the Radio Times magazine when he started working on the Alien production in England.


a.ii) On the 27th of December 2018, I looked further at the photo wondering, if it referenced a Gustave Doré Paradise Lost illustreation but I soon came to realised that it would have to Salvador Dali's "Uranium and Atomica Melancholica Idyll"from 1945 in a way it would be almost pointless to point it out. From my research, I had noticed that various Radio Times photographs would often reference paintings but it wasn't always easy to tell. Here the ruin in the photo couldn't be changed to match the Dali painting.

a.iii) Comparing it to "Uranium and Atomica Melancholica Idyll" it could be that because of it dark walls with holes showing the sky, that would have been loosely represented by the ruin in the photograph with its windows. Then the there is a sky blue face in the centre that would become the red lit face of of Louis Jourdan. The aircraft becomes his left hand. A crutch like form to the left of the blue face would become an elongated window

a.iv) However this is about Giger finding something to do with them having learnt about what they both referenced. for his Alien Monster II. If the Louis Jourdan photo did not really reference the Dali painting,  at least Giger saw a similarity enough for Alien Monster II, and later on January 8th, 2018 at Lunar Anomalies on Facebook, Andrew Currie would post a picture of the poster of "Apollo Astronauts"  by Pierre Mion,  published as supplement to National Geographic Vol. 144, No. 3 (September 1973) and I would suddenly realised the following that that HR Giger had seen this too and would find out that it referenced  Dali's "Uranium and Atomica Melancholica Idyll" (1945) and he would merge this into Alien Monster II as well

a.v) On April 3rd 2020, I came to look at illustrations for  Lovecraft stories old issues from Astounding Stories in 1946 and thought about how important these things might have seemed and perhaps the illustrators were playing along with this odd referencing system. In this case, HP Lovecraft's "Shadows out of time" for Astounding Stories (Published June 1936) was illustrated by Howard V. Brown, and I suddenly realised that Giger must have seen surely seen this too. 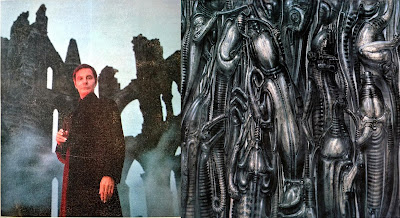 e) See: References 'Of the animals I saw, I could write volumes' Illustration for HP Lovecraft's "Shadows out of time" for Astounding Stories (Published June 1936) by Howard V. Brown?

i) See:  Referenced in Jigg's Jigsaw Puzzle illustrated by Ellis Nadler  for the Radio Times (1981)?