leading from
"Flying serpent over Olympia" #9 of The Eternals by Jack Kirby
and
20th century works inspired by the Henu Barque ? 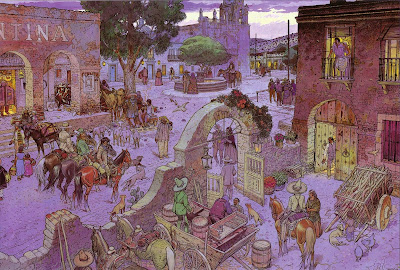 a) Chihuahua street scene illustration from "Blueberry's" (Published 1996) by Jean Giraud/Moebius
(Posted at the Jean Giraud Moebius Facebook page https://www.facebook.com/photo.php?fbid=121593918890523&set=gm.3084921341533858&type=3&theater&ifg=1 and this doesn't mean the person who posted the image is responsible for my perceptions about the image, but I wanted to give that URL to give a bit of context to my discovery of the image)


b) The flying serpent over Olympia illustration from #9 of The Eternals by Jack Kirby, published March 1977.

This illustration by Jack Kirby appears to be something that I believe loosely referenced a Giger picture, and also was referenced itself by HR Giger for the later stages of the design of the derelict ship.

If it turns out that it's understood that Giger didn't know anything about Jack Kirby, then at least his artwork suggests otherwise.

Likewise, Kirby played around with Giger's artwork in other comic book illustrations.

So, perhaps Moebius thought it might be fun to join in and do something with this reinterpretation game with the idea of doing something very very different that doesn't step on the other artist's toes.

The other side to that is that for some people I have to divide Moebius brain down into conscious and unconscious, so I don't know if he was conscious about what he was doing at the time.

My realisation about this came on January 7th, 2019 when I saw the illustration by Moebius at the Jean Giraud Moebius facebook group and I noticed that it felt as if it had a connection with my Henu Barque trail. 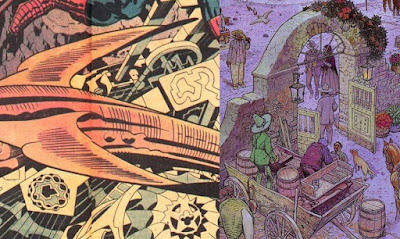 c) The right fin (or the upper fin) of the flying beast further away becomes the archway, while the left fin (the lower fin) becomes the side of the cart. 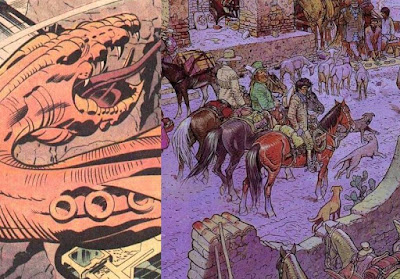 A circle on the left becomes the wide brimmed hat on top of the head of a man by the horse.

f) The centre of the top of the round building at the bottom of the image becomes the barrel at the central bottom of the drawing.

g) The top of the tower with the several rounded tops becomes the group of people standing in the distance to the side of the building on the right. .

The hand becomes the area of road between the crowd of people and the shrubs with red flowers growing on top of the right of the archway. 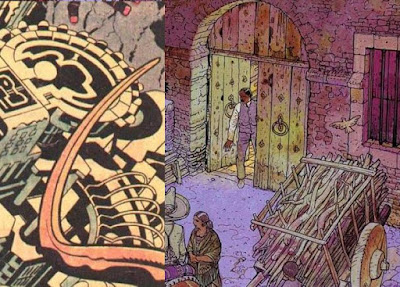 h) Circular area on top of a building and the row of architectual ribbing beneath it become the arch of the doorway and a cart full of cut tree branches..