HR Giger : The Spell IV: What has been firmly established 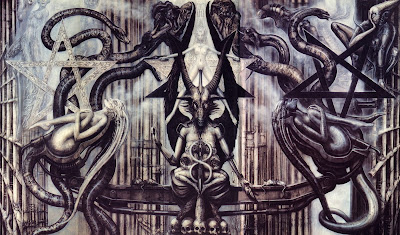 a) In 1975, HR Giger had started drawing of a design featuring a woman in a pentagram sitting upon a Baphomet, and also painted Baphomet (after Eliphas Levi) following the same idea that year with the female and the Baphomet as part of a rail car.

This extreme leaning towards definite occult symbolism appears to come about because his friendship with Sergius Golowin who understood a lot about occult and mysticism. While Giger had an interest in these things, he didn't practice it, but he basically was interested in the big topics of the soul that were there, being sexuality, redemption and power. (See Sergius Golowin introduces HR Giger to the work of HP Lovecraft)

He then went on to paint The Spell IV in 1977 as part of The Spell series that formed a four sided environment to stand within.


b) What came out of The Spell IV (as told to Carmen Giger which she mentions in an interview with Another Man Magazine) was the idea that the light and dark snakes were mythological reference to the fall of Adam and Eve, that the painting  symbolized humanity's quest for  enlightenment and with that the Baphomet symbolised humanity's position between the animal kingdom and the divine.

This Baphomet appeared to be based on the 19th century image of a Sabbatic Goat, created by Eliphas Levi. Giger had painted the composition using his gut instinct, and without thinking.