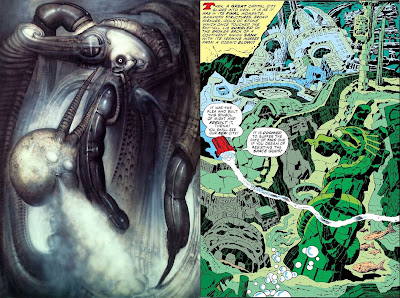 a) Panel showing The Deviant City from Marvel Comic's The Eternals (February 1977 issue )  references HR Giger's Mordor V (work 281) (1975)? On September 5th 2019, having decided that the panel from The Eternals must have referenced something, I looked at what had been happening around that time, and I soon realised that this referenced Giger's Mordor V as well as the painting "The Betrothal of Two Classic Edifices" (1943) by James Gleeson which I believe Giger's painting here referenced as well. So Kirby was focusing on the two.


b) Gaseous stream turned into bubbles.

c) Giger had a peculiar floating head with pustule like eyes, and so I think Kirby decided to have a head lower down with bulbous eyes.

d) Meanwhile in terms of its actual position in the painting, where the mouth of the face is, with gas pouring out, this would become the trail of the spacecraft, and of course it links up with what's in the Gleeson painting as well.

e) While Giger appears to have these sausage like forms shifting around the painting, and the bottom of the left one seems to be a transformation of the right skull socket, and so Kirby would just go along with the idea of more conventional serpent creature. 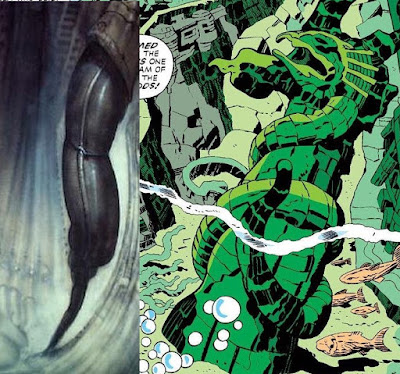 f) While earlier I have said that the right sausage formation has become the serpent, in terms of comparison between actual positions of formations, it's different. The right sausage becomes some architectural form going off the right edge, the left sausage becomes part of the wall, and an elongated vertical structure in the background that acts as a trunk like body for the upper right face with curved indentations running up it becomes the column with the snake. 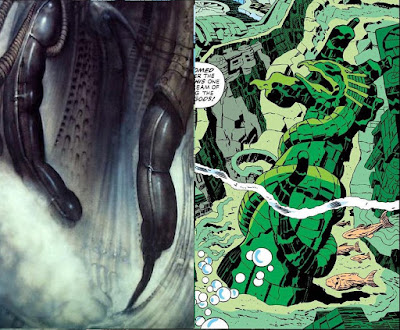 g) Upper right face and other formations becomes a leaning dome building and other structures on the upper right. The eye socket would become the circular window in the side of the building 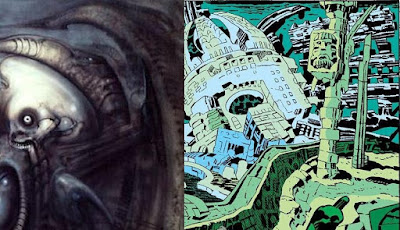