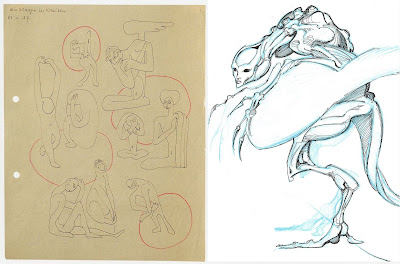 leading from
Splice: Early concept art for Dren by Vincenzo Natali
and
Wir Kleigen in kreisen "We complain in circles" (21/11/1937) by Sergei Eisentstein

a) A piece of concept art for Splice showing an early version of Dren (2000?) by Vincenzo Natali.
(source https://www.vincenzo-natali.com)


b) Since I have decided that Vincenzo Natali seemed to somehow take inspiration from Dali paintings along with their associated Eisenstein drawing and Pink Panther comic book covers, and that I assumed that Natali had referenced Dali's "Daddy Longlegs of the Future - Hope!", I looked for something by Eisenstein that connected with the painting.

c) Seeing the drawing "Wir Kleigen in kreisen" ("We complain in circles") by Sergei Eisenstein, I assumed that it was referenced by Salvador Dali amongst other things when he painted "Daddy Longlegs of the Future - Hope!" painted in 1940, as if Dali took the figures and circles spaced out across the composition and transformed them. However there is more than one Eisenstein drawing that shows signs of being adapted by Dali for that painting, but  it looked to me as if this could be the one that  Vincenzo Natali used. See also: "Daddy Longlegs of the evening - Hope!" (1940) by Salvador Dali references "Wir Klagen in Kreiser"(1937) by Sergei Eisenstein ? 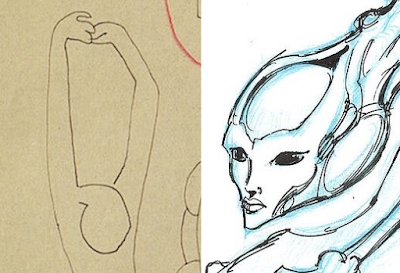 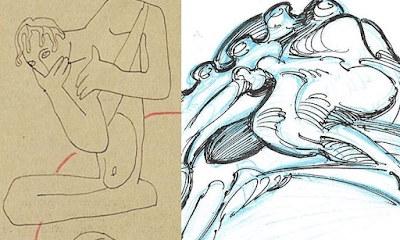 g) The left circle becomes the bend of the wing

h) The man with the towel becomes the tail 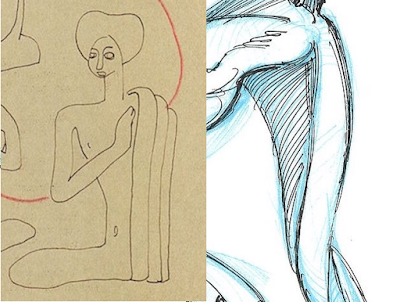