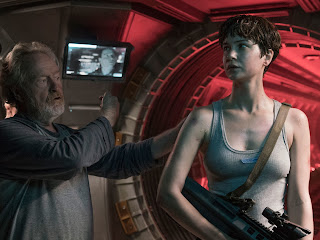 leading
Alien: Covenant
a) Waterston gets the role
Katherine Waterston was in a black cab in london when her agent called her and told her that she got the part. She felt as if someone had got the wrong number or there had been a mistake
b) Chief terraformist
The character Daniels the chief terraformist. When they get to the planet, they are pioneers setting up a new world.
Once they get to the planet, she's in charge of making things grow there.
There's a massive section of the Covenant ship where all the little plants grown in space greenhouses, and she would be in charge of that.
c) Reluctant Hero
There are two things that keep her from getting killed for most of the film, and they are courage and good fortune.’
Daniels's not a soldier, she's not a martial artist but she is a terraformist.
She kept trying to get the men to teach her such things such as how to use a stick like an axe, how to use tools that she would use when they get to the planet to help grow things
She is a classic reluctant hero.
Perhaps if she were asked at the beginning of the film if she was particularly courageous or brave, she wouldn't know how to answer that question but it's only when she's tested thagt she discovers what she is capable of..
Aboard the Covenant, they have great big trucks and forklifts.
A lot of what Waterston does in the film is incorporate what Daniels would know how to use.
In the film, felt that they were making her too good at holding the guns and fighting the aliens, and so she tried to make the movements a little bit more pedestrian.
d) Mother of Ripley rumour
She was also aware of the rumour that her character was the mother of Ripley, but she thought about the episode of Fawlty Towers where John Cleese's character tells Manuel that he has to lie about something.  "Whenever anyone asks you, you say, ‘I know nothing.’” and this is what would go through her mind when asked by Journalists about the rumour.
e) Praise from Sigourney
Sigourney came to see the movie, and said some like "You were good" to Waterston.  Whatever she said was nothing extraordinary but indeed it would be something that Waterston would likely hold onto for years, and when she got the job , she thought immediately of that moment
So, that’s what plays on my mind whenever people ask me these spoiler questions.
Posted by wmmvrrvrrmm