Storyboard for Alien featuring the alien beast ejected into space (1978) by Ridley Scott references photograph of JG Ballard in 1969 or 1970 for Issue #1 of Jannick Storm's J.G. Ballard newsletter, Limbo?

leading from
Photograph of JG Ballard in 1969 or 1970 for Issue #1 of Jannick Storm's J.G. Ballard newsletter, Limbo
and
Ridleygrams

d) Yes, this seems to be a bit of a stretch, but I think that when Ridley drew his Ballardalien, he was having a problem as much as anyone else would, transforming his face into our favourite biomechanoid beast

e) So Ridley took JG Ballard's nose and chin, including that in the alien head design, and the ears as well. The nose became the ridge on top of the alien's head, the chin became the chin. I suppose the sideburns were included in the lines running around the side, and the ears became the bulge to the back of the head. 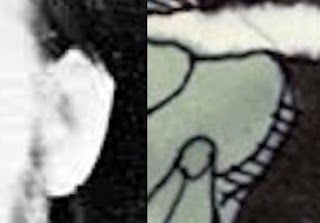 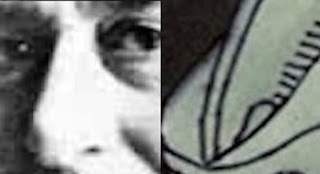 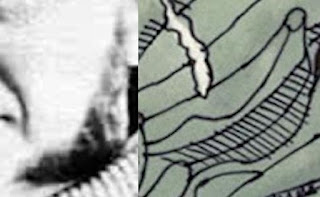 g) Hair on top of head and hand

h) I might also want to look at the idea that the alien beast's head might be loosely inspired by JG Ballard's eye, including the eye lid, the area under the eye, etc but not in a exact way, since I suppose the Necronom IV painting is slightly inspired by the Eye of Horus, so Ridley could do something like that. 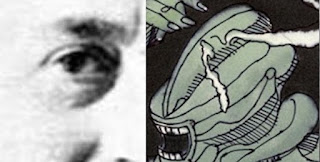