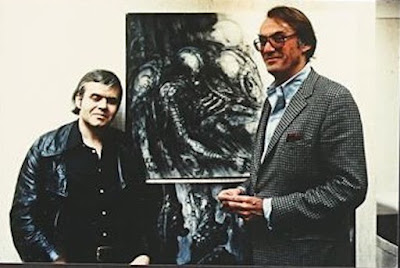 a) A missing concept painting


a.i) Ever since having seen the painting of the Alien landscape and noticed the detail of the dead space jockey,  I wondered if Giger had done any other drawings or paintings to explore further this thing.

When Giger's Alien Diary was released, in 2013, I noticed a drawing by Giger in pencil of the detail showing the figure almost resting on a hand like formation, and that the shapes surrounding the figure recalled shapes seen in this painting
There is very little solid information to talk about.
It was supposed to certainly be an image of an alien space jockey type thing but in what context was not known,
The upper torso was obvious in the painting seen.
Work 386 became the designated number for the egg silo interior artwork, but in the Alien Diary it was mentioned that the numbered work was of the alien corpse detail and I suppose that was so at the time. 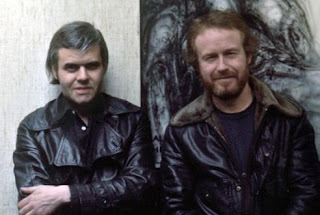 a.ii) Photograph turns up at Propstore

Later, a photograph came up in a Propstore auction in December 2019 with HR Giger and Gordon Carroll standing either side of it (see top of page for full image)

The image provided on the internet was low in resolution.

Meanwhile the painting only shows up in the background of one known photograph, with Gordon Carroll standing in front of the right side of the piece that looks as if it hadn't yet been painted in.. 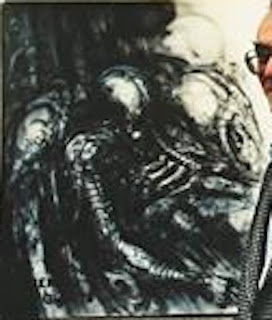 b) Questions about the painting

For some time, the image was only partially visible in a photograph with HR Giger, Ridley Scott and Gordon Caroll standing in front of it, as seen on page 12 of the book Giger's Alien,

It's hard for me to say what Giger was planning to do with this painting.

Was he creating a study for the Space Jockey sculpture as seen from a perspective view of the thing sitting in the chair in the pilot chamber?

b) References sketch of skeleton imbedded in the rock for Alien by HR Giger?

b.i) The two images side by side. 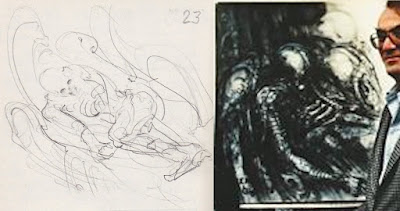 b.ii)  Skull that becomes a shoulder
The skull in the sketch becomes the shoulder of the figure in the painting, while a rounder shape to the upper right of the skull becomes the new head.

b.iii) Limbs that transform into a single arm
The arm becomes the upper arm, the hand becomes the elbow, while perhaps leg becomes the lower arm, although still in the painting, the corpse appears to have a lower leg. 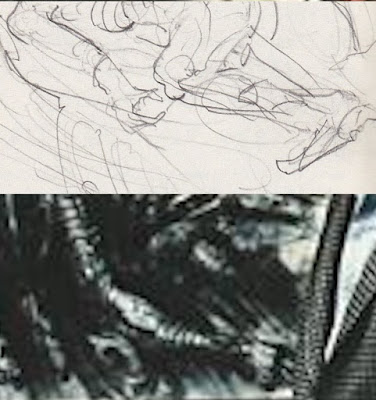 c.i) References photo of cameraman Freddie Young for an interview in the Radio Times to publicise the showing of the 41st Parallel movie on TV (December 1973)? 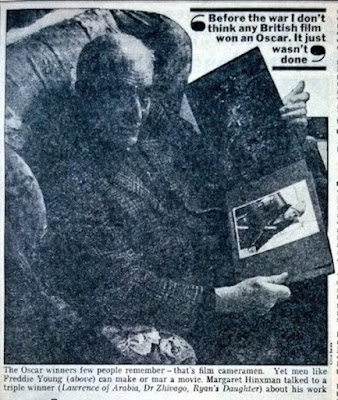 c.ii) The two images side by side. 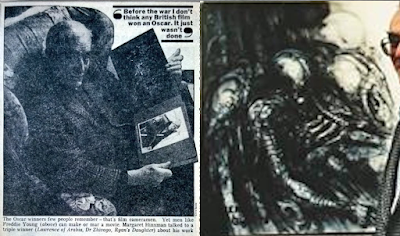