Cover of The Panther #13 (July 1973) references Alice and the flamingo from Lewis Carroll's Alice In Wonderland (Published 1865) by John Tenniel ? 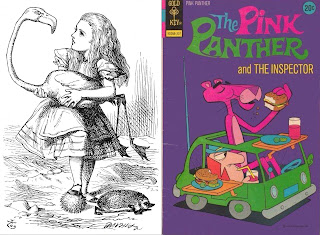 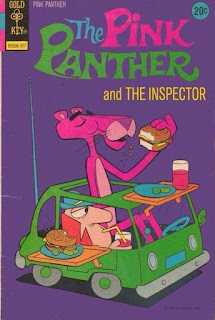 b) Alice and the flamingo from Lewis Carroll's Alice In Wonderland (Published 1865) by John Tenniel ? 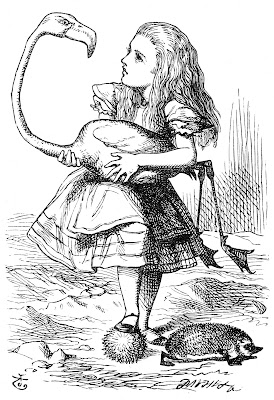 c)  Comparable areas side by side 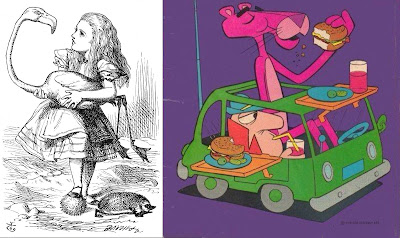 e)  Alice's apron as a tray, with Flamingo's body as inspector's head and leg's as the Pink Panther's

In relation to the above, it would seem as if Alice's apron became the tray, the Flamingo's main body became the inspector, while its legs become the Pink Panther's long legs with the front of the van. 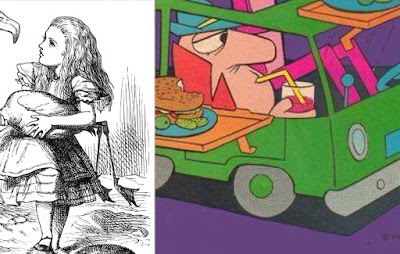 f)  Shoulders as van roof
Then Alice's shoulders become the roof of the van, and in the way the apron became a tray, the right shoulder becomes a tray.

g) Hedgehog burgers?
Having worked that out, I wonder if the artist decided to turn the hedgehogs into hamburgers putting them elsewhere in the illustration

h) Also the flamingo's beak becomes the Pink Panther's nose while Alice's head becomes a hamburger
Having said what I said about the hedgehogs and the hamburger in buns, another thing to note is that the beak of the flamingo taken with Alice's head become the Pink panther's nose and the hamburger.
It would be as if the illustrator has used that section for a second time and moved it upwards.
Alice's face would become the white park of the burger bun while her hair would becomes the crust of the bun.
Alice's right upper arm becomes the glass of drink, while here it would seem as if the flamingo's main body has become the blue plate on the tray on the front of the van roof