Supposed "Mayan" artifact showing contact with extra terrestrials, Side B (Image brought to my attention via https://www.theothersideofmidnight.com/20201212_wolter/) which appeared in Scott Wolter's series America Unearthed, Season 4, Episode 2: Alien Artifacts. (The America Unearthed program I believe attempted presented a skeptical view about the item but I wouldn't know what exactly I was supposed to understand as real beyond my attempts to compare it to 19th and 20th century art. I would actually come to watch the program for the first time on August 6th 2021)) 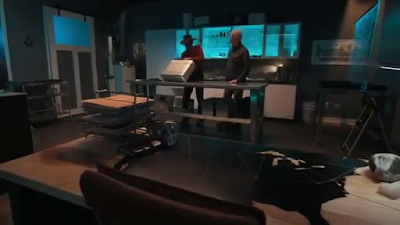 a.ii) Artifact hunter Mark Russell has some exciting to show.
In this episode of America Unearthed, we are presented with a scene where artifact collecter Mark Russell presents Scott Wolter with some artefacts, as if Scott should be surprised by the fact that they represent mesoamerican people's contact with extra-terrestrials, although Scott Wolter told Richard Hoagland later on that he came by such artifacts as a stall a few years before in the Paradyne Symposium where he was giving a talk and had to buy some of these items. Perhaps he usually professes ignorance about these things to get the other person to tell him everything without relying on what he knew. Mark Russell was there to see these things being dug up and he was a believer. He believed that these depictions of people with large head and large slanted eyes were alien. Beforehand Mark Russell had a sample of resin from one of the artefacts carbon-14 dated and revealed to be 9.500 years old and it was up to Scott Wolter to have the results verified by another source. 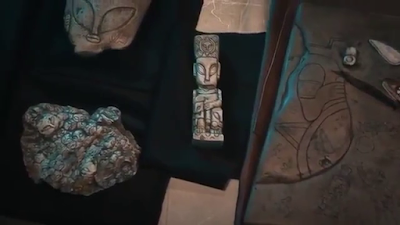 a.iii) Conversation with Dr Barnhart
However he would take his findings to have an open minded discussion with Dr. Edwin Barnhart the director of the Maya Exploration Center. Barnhart didn't see how any of these could belong to a known Mesoamerican culture, he was able to be polite, open minded and creative with theories, and be happy to show up on Ancient Aliens TV series as well, but he could only admit that there was much that was unknown about the ancient cultures of Mesoamerica anyway.
a.iv) Jason Colavito jumps in to refute the claims
On 6th August 2021,  I found that writer Jason Colavito presented on his own website a skeptical view of what was presented in the program deciding that it wasn't thorough enough. He managed to make the Necronom IV connection in an article published on 4th June 2019, which is before I knew about the artifact, which is fair enough.

So he was familiar with HR Giger's work and he puts it down to being inspired by Gigers Necronom IV.  I have decided that there was another piece of Giger's art involved and some knowledge of a possible connection with John Tenniel's illustrations for Alice In Wonderland and its sequel.

We can know though that the monster from Ridley Scott's movie Alien is only mostly based upon Necronom IV and this thing isn't the movie Alien but the artist who created this artifact ought to have been familiar with the way that one led to another, as should Jason Colavito.

What is behind Giger's Necronom IV is another long discussion to be had in itself.

Colavito mentions that the areas of colour are paint and ought to be decayed by the moist soil, but I don't know what the material is although in the video, we're presented with the idea that the mouth area appears to be stuck down with organic resin.

b) My point of view would be to take a look at the artifacts and how they relate to art as we know it through history leading into the past from today. I am interested in how a good number of these artefacts show that the artist has some sort of knowledge about connections between the art of HR Giger,  his friend  Ernst Fuchs, and John Tenniel's illustration for Alice In Wonderland and its sequel from the mid 19th century that created a splash in the minds of a lot of artists from then, and so I keep finding that these pieces reveal connections with art leading backwards from the time that they have been discovered. If it turns out to be a work of a time traveller who is trying to shake up the timeline, a person from the distant past who could see into the future or someone who is from this time period but who has a rich understanding of art, I'm still interested but at this time I think it's the latter 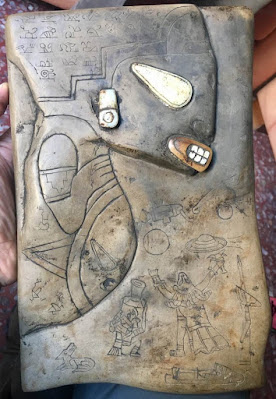 b.i) The two side by side

b.ii) The front of the head becomes the face of this humanoid from the "Mayan" artifact 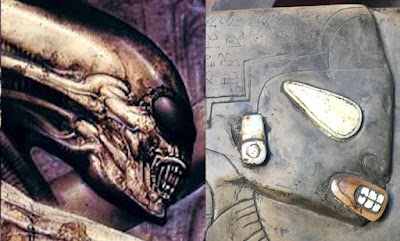 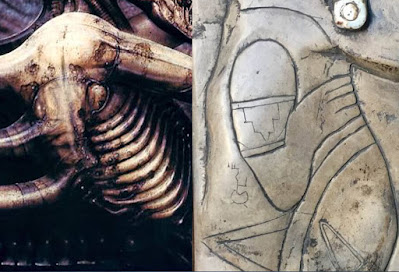 b.v) Details in the background resembling some sort of vertical reptilian face with a hand like form on a curved pipe 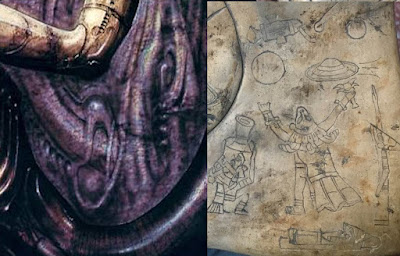 b.vi) A hand like form on a curved pipe 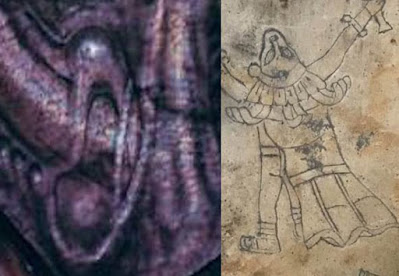 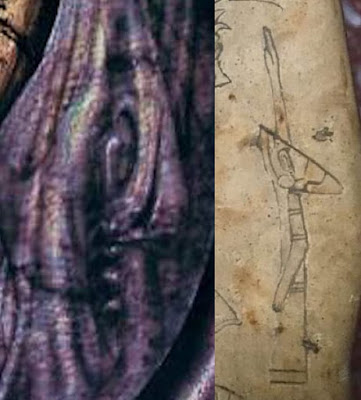 c.ii) The left collar like structure of the female sarcophagus becomes the long slanted eye of an extra-terrestrial grey 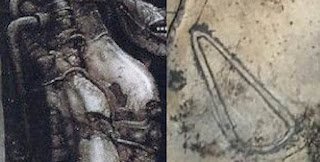 c.iv) The lower part of the female sarcophagus is transformed a man holding a structure that loosely resembles a top hat above his head 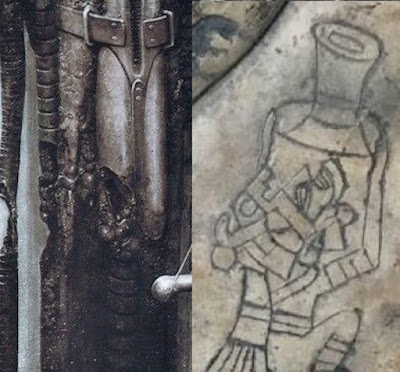 c.v) Head like structure is transformed into a flying saucer 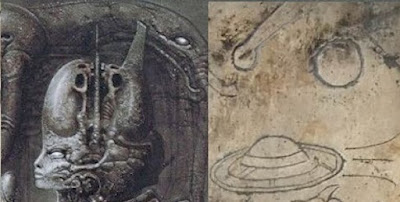 c.vi) The phallic skull form with crossbow part becomes the mean with cape 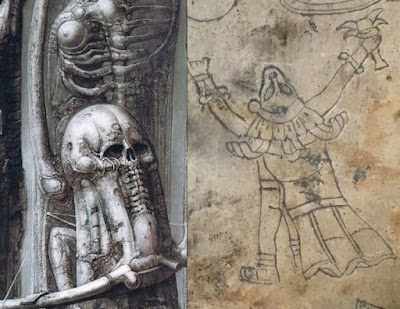 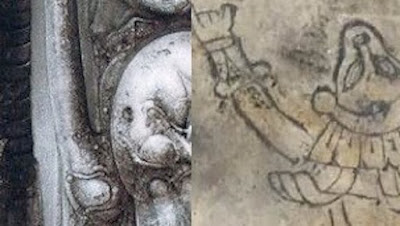 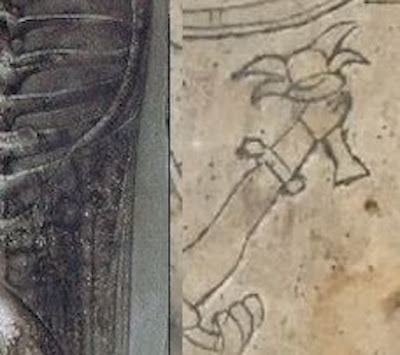 d) References Alice and the Knitting Sheep from "Alice Through The Looking Glass" (published 1871) John Tenniel ? 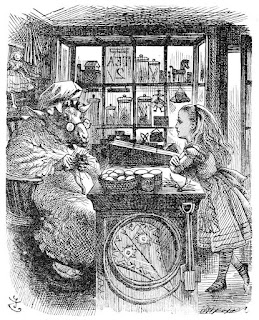 d.i) The Tenniel illustration and the comparable part of the "Mayan" artifact 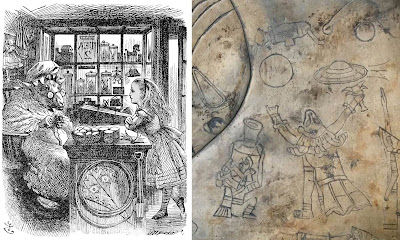 d.ii) Here it would be the sheep's head that becomes the stretched eye 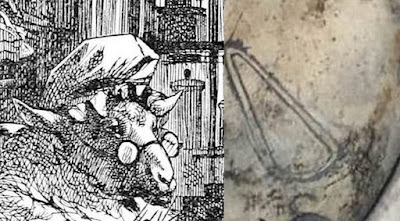 d.iii) The Alice becomes the man 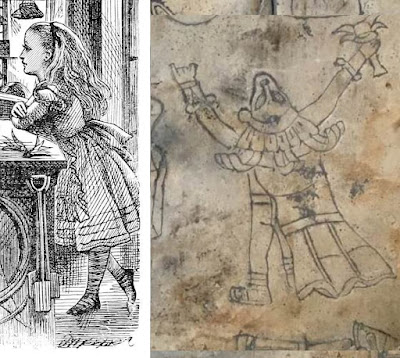 d.iv) The left side of the counter becomes the crouching human, while the sheep's foot becomes  the fish tail like shape at the end of the headdress 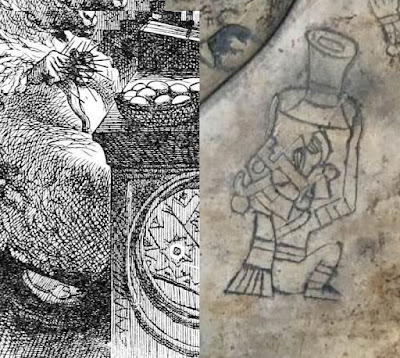 d.v) Meanwhile the basket of eggs and the slanted display case becomes the top hat like structure 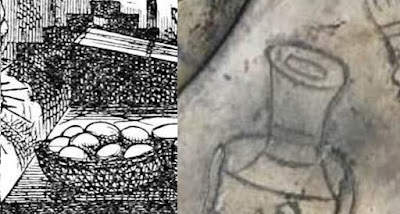 e. Showing comparable details from the the three image together

e.i) The Alice and the Knitting Sheep illustration by Tenniel, the Biomechanoid III (1974) by HR Giger and the "Mayan" artifact side by side 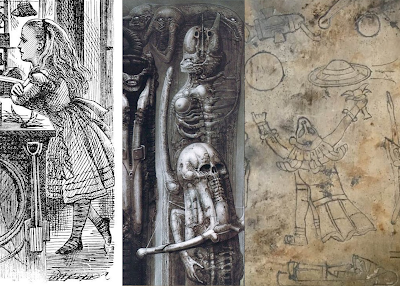 e.iii) Left side of counter, female sarcophagus and humanoid with top hat like thing 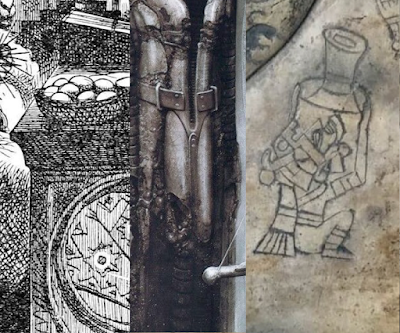