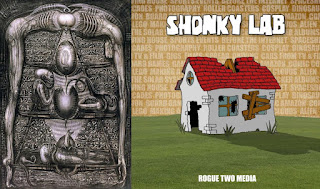 a) Looking at Shonky Lab's views
In August 2016, Shonky Lab had a program about Giger's Alien monster.
What is to be said here is what they thought at the time or more ideas than could be uttered in a single program, or one could say that if they perhaps had the chance to read something another day that would have given them another take on the whole thing.
One could almost turn it into a game where the people are being given points for accuracy for taking a drive around this world of information and see where they go off course, etc but it's a conversation often made from off the top of the head and often very confused associations.
Perhaps these sorts of discussions with their theories and ways of understanding the films are likely to set off new ideas.
Visit: Shonky Lab podcast : The ALIEN Creature from H.R. Giger 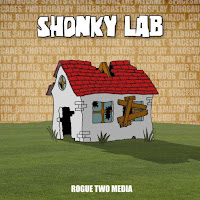 b) Confusion via Alien Vault

Lee had a collection of Alien books and one was Alien Vault by Ian Nathan, although he couldn't recall the name of the writer and thought that the surname was Berriman.

b.ii) Going along with Ian Nathan's interpretation of the hieroglyphs

It appeared that Lee had seen the alien life cycle hieroglyphs in the Book of Alien and his thoughts went along with Ian Nathan's view that the hieroglyphs showed that the alien eventually would become the Space Jockey rather than being a sort of warning sign in the space derelict.

It starts to attack people, doing whatever comes naturally without ever knowing what it's supposed to be doing and that there's a kind of implication being that it would end up being like the Space jockey.
b.iii) What the space jockey was doing in the life cycle hieroglyphs
In Book of Alien, Ridley did mention that he wondered if the alien spaceship was carrying its own kind and this book showed the later version of the Alien Life Cycle Hieroglyphs that appeared to show the Space Jockey was somehow involved, although the idea was that this strange entity was supposed to be just victim of the pilot's species as if it were a warning sign.
See : Ian Nathan's Alien Vault and the Alien Life Cycle Hieroglyphics
See: Alien: Variations of Giger's Life Cycle Hieroglyphics painting
See also: Alien: Chestburster to young Adult 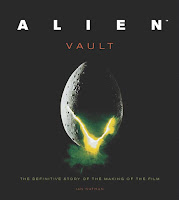 c) Rogue alien in Ant analogy
So they thought that it spent four hours in a cargo bay, hungry and not fed.
They also went with an ant analogy, the idea that you could take an ant from a random hive and put it into another ant colony, it would just start attacking everything until it's basically taken down by the ants of the other colony, and so they thought about how the alien was acting on instinct when it shouldn't be.
Ridley Scott also had also compared the alien to ants in the past for various reasons
See : Alien: Life cycle of the alien 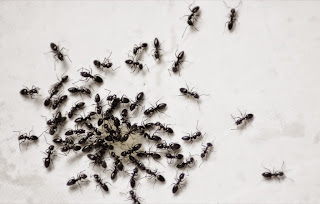 In Book of Alien, Dan was quoted talking about the Alien being dumb and without its own kind

Dan O'Bannon in his original script did have the idea that the alien beast grew up to be a member of a cultured civilisation and but in what would be considered its teenage years, it went through a phase of blood lust with the need to reproduce, which is what it was doing in the Alien movie before that changed,

But there was no suggestion that these creatures were related to the Space Jockey until HR Giger was brought in to design both the pyramid and the space derelict ship both in the same style before because of their similarity they were fused into one structure being the derelict ship with the egg silo within or beneath.

Still, this cultured civilisation would have been intelligent beings capable of architecture and higher learning while not actually be the space jockey, if the difference meant anything after a while.
There were also behind the scenes discussions during the production where it was being thought that the alien grew up to be the space jockey
See : Alien: Chestburster to Adult
e) Something more to the alien monster?

The discussion went along the idea that this creature was being treated as a holy parasite but there was much more to it than being a killing machine to the point that if Ridley had gone ahead with the scene where the alien creature kills Ripley and records the ship's log with her voice would evolve into a fully intelligent creature that could mimick the English language.

It was as if there was something more to what the creature would become.
See : An alternate end for Alien
f) Facehugger
f.i) Hands of death
They pointed out that the egg started out as having a single slit opening before being developed into a cross slit, and that the face hugger looks as if it's made up of "two pairs of hands"
Well we can look at the final Facehugger and see how it resembles something made from a pair of hands fused together, and something to point out might be that the chestburster in this image has a pair of hands.
One of the Facehuggers pops out of the egg appeared to resembled the hand of Judge Death from the 2000 AD comic book story Judge Dredd, popping out like a jack-in-the-box, and this last idea was something that Giger thought about.
f.ii) Based upon a pair of pliers

Something also that's mentioned is that it's based upon a pair of pliers, but they would have meant the original Facehugger design by Giger for Dan O'Bannon during preproduction, where the creature with a head near enough like a bird with a beak that forced open the victim's mouth