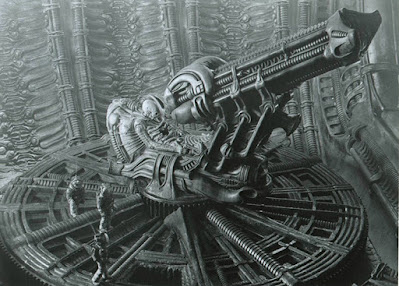 leading from
"Pakal votan" tomb lid
and
Alien: Unlocking the design of the Space Jockey

a) Connecting HR Giger's Space Jockey and the famous lid from Pacal's tomb is an important concern.

First of all there isn't any actual recorded direct discussion about the famous tomb lid actually being an inspiration for the Space Jockey from anyone involved in the Alien production, it remains very likely in terms of the final way that Giger designed the piece.

I might prefer to call it the Pakal Votan tomb lid rather than Lord Pacal's tomb lid, because Von Daniken refers to it as this, and while it might be incorrect, it's a great name, perhaps as great as Mickey Mouse is a name for a Disney cartoon character and Darth Vader a fictional villain for Star Wars

b) Giger's knowledge of Von Daniken

Von Daniken's idea were something that Giger knew about and appears to have taken an interest in as something unusual and different, and supported these ideas for what they were. In Chur, which is where Giger lived, Von Daniken was sentenced to three and a half years in jail for fraud, and also Giger's friend the mythologist Sergius Golowin co-wrote a book about Von Daniken.

c)  Tomb lid used for ideas in Necronom V that was a starting point for the Space Jockey?

The tomb lid design appears looks as if it were something that got into Giger's painting Necronom V, with the central female figure absorbing elements from the depiction of Lord Pacal, as if riding something in the position of a motorcyclist.

Necronom V is well known as a starting point for the Space Jockey design with Ridley drawing something resembled very spooky and barely describable based upin the painting before Giger took it further and I think that the tomb lid got into a number of pieces by Giger in different ways.

Von Daniken's ideas should be considered very creatively interesting at least for those building a science fiction mythology, even if his books have lacked a solid enough understanding of anything to really make his ideas worth taking too seriously.

Also I think that the tomb lid got into Ernst Fuchs' Triump Of The Unicorn from 1952 long before Von Daniken even had a thought about it, and this piece of art is something that has inspired Giger in various works.

So people can be creatively inspired by it without having to even know about Von Daniken's point of view about the whole thing. 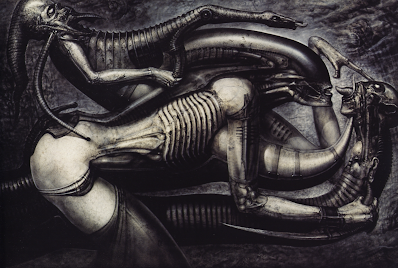 c.ii) ) See also: Necronom V referenced in early rdleygram of the sideview of the Spacejockey (1978) by Ridley Scott for Alien

c.iii) An ilustration of the tomb lid nect o Ernst Fuchs' Triump Of The Unicorn from 1952
See also: Ernst Fuchs 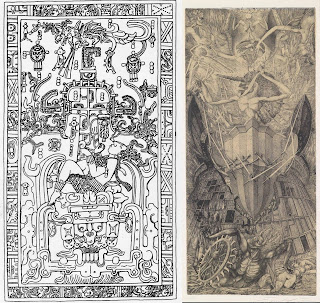 When it comes to any piece of art by Giger, it does appear as if ideas from at least a dozen different directions converged in whatever piece of art he was working on.

With the space jockey, I have identified the Henu Barque as something that very strongly influenced the Space Jockey design as well, but since I think that Giger's art shows that he was swapping ideas with Jack Kirby whether either person was conscious of what they were doing.

We can look at Jack Kirby's giant space god sculpture that shows an astronaut sitting in a rocket ship and see that as something obviously inspired by Von Daniken's Chariots of the Gods, and also know that the person represented as a giant in the sculpture of is actually a normal sized human character named Ajak who is to be found in hibernation within the vaults of the building.

In the past he has been known to the Aztecs a the god Quetzacoatal and to the Incans as the hero Tecumozin , Lord of Flight,

Jack Kirby acknowledged himself how he had been inspired by that Von Daniken's book for The Eternals.

We can understand that there was some sort of connection between the Space Jockey design and the huge outsized dead pilot's remains in his flight seat, known as the Space Jockey, as if a number of things that Kirby drew for The Eternals would be absorbed into Giger's designs one way or another perhaps with Kirby's blessing.

The idea of having a giant dead pilot came into the production before Giger started work, since O'Bannon liked the idea of the giant skeletons seen in Planet of the Vampires and incorporated that into the early script.

Perhaps the way the tomb lid is made up of decorative structures that are symbolic but still some people interpret as a spaceship, has been carried over into the Space Jockey in his chair design.

We can see how Giger's design looks roughly made up from something suggestive of intricate decorative structures suggestive of an ancient culture, although the overall form is roughly ancient Egyptian. 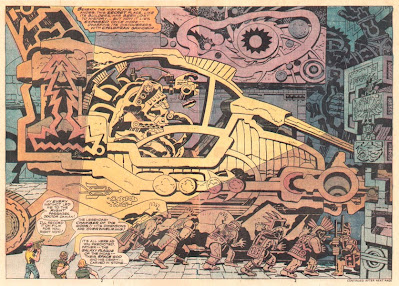 In Prometheus, we see a tablet based on the tomb lid design where Pacal's head has been giving a breathing pipe almost like some sort of proboscis to make it resemble in some way the Space Jockey from Alien.

The the connection between the two seems to be appreciated as a joke. 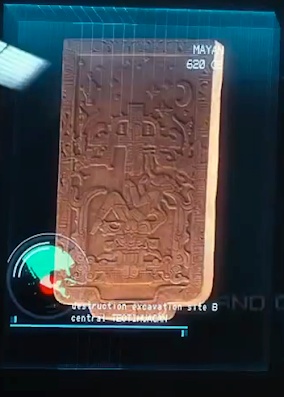