leading from
Alien : Jewel associations
and
Alien; Development by way of Tintin
a) Replication
a.i) What we see find in the James Bond film Diamonds Are Forever is the idea of replication, with the chief villain Blofeld busy having people turned into replicas of himself, which I associated with the alien life form out to replicate itself.
Looking at the first plageOn the first page with the opening scene where the museum finds that one of their statues is missing, we encounter Tintin getting ready in the morning and finding out on the radio about the missing fetish.

a.ii) I think this is transformed into James Bond entering the mysterious facility where they're about to turn a man into a replica of the character Blofeld and they find the man lying in a bath of mud, which I think becomes something that helps set off the idea of the scene where the remains of the space jockey are discovered in its seat in the control room of the derelict spaceship first significantly represented in Ron Cobb's artwork for the outsized alien pilot

a.iii) The page might echo the idea of the opening scene of Blood Of The Mummy's Tomb where the explorers enter an Egyptian tomb with its various ornaments and find inside the sarcophagus with the Egyptian queen's preserved body which appeared to connect with Diamonds Are Forever

See also: Alien: Evolution of the Alien script via the James Bond film "Diamonds Are Forever"?

a.iv) Blofeld presenting his plan to make multiple dopplegangers of himself 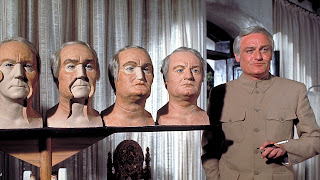 b) Diamond concealed in a human form
b.i) In the Tintin story,  a wooden fetish of a human form is stolen from a museum and Tintin's finds himself involved in its recovery.
We are introduced to the Arumbayas tribe who was encountered by explorer William Walked back in the 19th century, and they offered him the fetish as a token of friendship during his stay with the tibe, But as soon as the explorers left, the  Arumbayas had discovered that a sacred stone had disappeared. It seemed that the stone gave protection from snake-bite to anyone who touched it.  A character named Lopez who was the interpreter for the explorers had been seen prowling around the hug where the magic stone was kept under guard.
In fury, the Arumbayas set off in pursuit of the expedition, caught up with them and massacred almost oof the part, although Walker managed to escape carrying the fetish, and Lopez got away badly wounded, the stone was never recovered.
Tintin realised that Lopexe must have concealed it in the fetish with the idea of getting back to it later on.

b.iv)  Fetish containing the diamond transformed into a dead human body containing diamonds
As if the wooden fetish of a humanoid form now becomes an actual dead human body, James Bond kills Peter Franks the diamond smuggler, and decided to smuggle the diamonds inside his corpse to get them from Amsterdam to Las Vegas where the body is soon cremated and James Bond received a funeral urn full of diamonds. 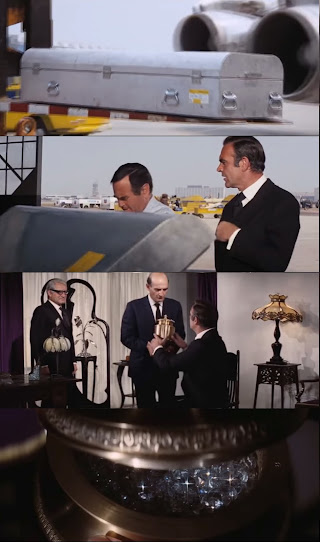 b.v) This I think of course is one of the things that seems to lead to the idea of Kane bringing the alien beast aboard the Nostrom by having it contained within his body when the Facehugger impregnates him before it later bites its wa out of his body

c) A Howard Hughes type figure
c.i) In the jungle, Tintin encounters an elderly man named Ridgewell who has long white hair and a long white beard.  He was an explorer who decided to stay in the jungle and was presumed by Western society to be dead.
Probably by the 1970s could be interpreted as a Howard Hughes type figure,
Ridgewell is able to talk to the reveals the Arumbayas who tell him the story of the stone, how it helped to protect the Arumbayas people from snakebits. It was probably a diamond, and it was stolen by a member of the Walker expedition.
William Walker in the middle of the 19th century had left with the fetish as a peace offering and the interpreter, a man called Lopez, who stole the stone, concealed it inside the fetish
Perhaps someone involved in the Bond film thought about how this man could be an imagined Howard Hughes figure.
Of course we don't have an equivalent of this character in Alien but it's interesting to see a possible Tintin- Bond connection here

c.ii) In the James Bond movie, a Howard Hughes type figure is introduced, Willard Whyte a clean cut millionaire who owns the company Whyte House, has his company taken over by Blofeld, and is soon found imprisoned at his home.
c.iii) Rip Torn as Howard Hughes (1979) in a play by Sam Shepard called "Seduced", about Howard Hughes late years, after the reclusive millionaire died in 1976 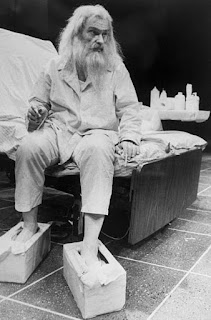 d) Two sets of killers that become the Alien beast
d.i) In 'The Broken Ear', we are presented with the murderous villains Alonso and Ramón, they have murdered Roderigo Tortilla throwing him overboard, stealing from him the fetish and attempt to kill Tintin who is busy foiling their plans. It's their murderous acts that are a starting point for the destructive nature of the alien beast in Alien.
d.ii) But we might also think about the hitmen Mr Wint and Mr Kidd from Diamonds Are Forever who go on a murder spree, and it seems as if they might be inspired by villains Alonso and Ramón from the Tintin story
d.iii) So it becomes one direction of inspiration for the alien beast 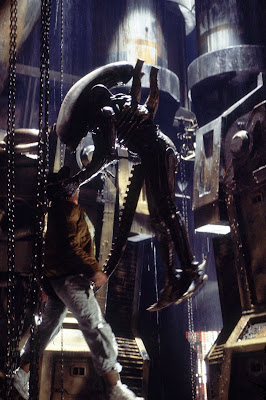 d.iv) Alonso and Ramón appear to have become the basis for the idea of Mr Wint and Mr Kidd
Disturbingly I might suggest now that the James Bond film and novel Diamonds Are Forever which I've discovered appears to tie up with the Alien script too also seems to borrow various ideas from 'The Broken Ear"
So in 'The Broken Ear', a diamond was being smuggled in a small human shaped fetish, but in the James Bond story Diamonds Are Forever, they smuggle a diamond in a dead human body to get it past customs.
At the end of the film, aboard a cruiser, Mr Wint and Mr Kidd both go overboard to their deaths one way, as do the villains in The Adventures of Tintin: The Broken Ear.
The character Corporal Diaz tries to assasinate  with a barrel of dynamite, but the general throws a cigar out and his hat catches fire and he leaps into the water.
d.iv) Death of the hitmen, and alien
It would be as if this failed assasination attempt becomes the death of Mr Kidd as comes in with a bomb in a time bomb in a trolly to assassinate James Bond and his helper Tiffany, he about to attack him with flaming skewers but catches fire, and goes over the side into the sea. 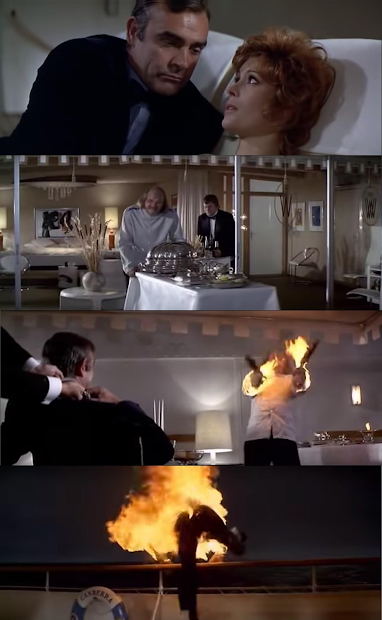 d.v) Corporal Diaz  throws a bomb into the office of General Diaz while the general and Tintin who has been made a colonel play chess, but Tintin chucks it back out, and as Diaz gets away, he is hit on the back of the head and flips over into the fount pool getting wet.

d.vi) Time bomb
The character Corporal Diaz meets his end carrying a bag of time bombed explosives but he misjudges the time since there was a power cut affecting a clock in the street
d.vii) Mr Wint overboard
It would be as if this scene would become the death scene for Mr Wint, as James Bond bends Mr Wint over putting the time bomb in his hands pulled between his legs and flips him over into the sea where he dies from the blast of the bomb as it goes off
In the novel, Wint and Kidd are both killed by Bond aboard a ship, with Kidd's body thrown out through the portal into the ocean by James Bond, but naturally in the movie version of their deaths was much more fiery and explosive 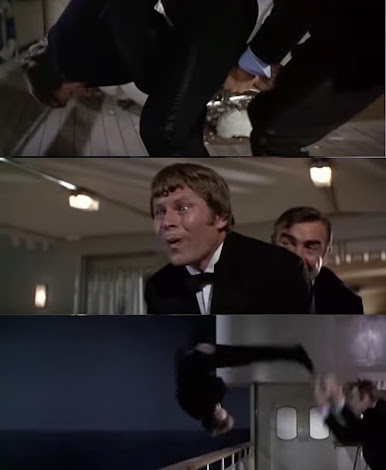 d.viii) While Corporal Diaz's failed attempts to carry out an assassination become part of the way Mr Wint and Mr Kidd die,  Alonso and Ramón falling over the side of an ocean liner and falling to to the bottom of the ocean becomes another factor in Mr Wint and Mr Kidd's deaths
And so, as we find in the final Alien movie, the Alien beast is sucked out of the Narcissus into space and soon is blasted away by the engines of tbe Narcissus