a) The idea for the creature

HR Giger had been evolving his idea for a Super Face-hugger around late August 1990, but ADI would design their own version of the creature and build it

It was supposed to be the a new strain of Face-Hugger, presumably one that would implant the seed of the queen.

Eventually ADI would even go as far as calling it the Queen Alien Facehugger , and that it was armour plated because it carried royalty in the form of the Queen embryo.

It was bigger than the regular face-hugger, had translucent webbing between the fingers and was heavily armoud with plates and spines.

It was cast out of urethane and had an armature inside built to look like bones.

It was articulated so that you could put it into any position, but it was never meant to be seen alive.

Despite the considerable expenditure of effort, nothing of this creature survived the final cut

Although cut from the theatrical release, the Queen Alien Facehugger could be seen in the extended edition of Alien 3.

It would found on the trolley in the abattoir after the ox had been found dead and had been transported in on it., and its own dead form would be held up by one of the prison inmate named Murphu 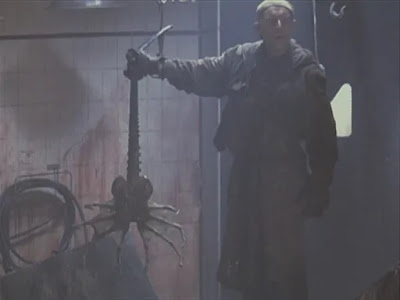