Alien and the anti-life equation

leading from
Alien: The  robot head speaks
and
Alien: afterthoughts
(still collating)
a) Anti-Life in the Alien series scripts
a.i) A detail in Alien script revision from 10th August 1978
We can find in an Alien script revision from 10th August 1978, Ash the robot now a head talking away enigmatically tells the crew "How can you not admire the simple symmetry it presents. An intergalactic parasite, from time immemorial, capable of laying dormant for infinite periods. it's sole purpose to destroy other  species merely to recreate itself, for life and anti-life"
We might begin wonder if there was some strange text being half quoted from elsewhere , and it ends with the words "for life and anti-life"
a.ii) Summary put forth for an Alien sequel
In the summary for an Alien sequel by Hill and Giler, inscriptions that reveal how the alien are more than flesh eating monsters, that they are an anti-life force that could endanger the living universe.
This strange idea about life and anti-life is taken a little further, but I can't claim to know what they were trying to get at.
a.iii) As mentioned in William Gibson's Alien 3 script
In William Gibson's Alien 3 script, this ideas is continued when we read the android Bishop telling Hicks about the alien species that "These creatures are to biological life what antimatter is to matter." and says to him "You'll have to trace them back, find the point of origin. The first source. And destroy it " 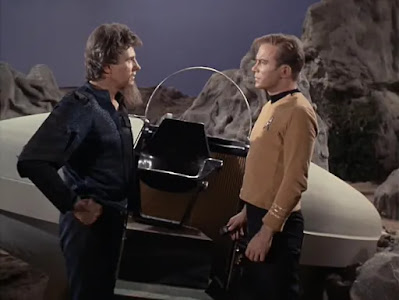 b) Anti-Matter universe in Star Trek

b.i) Perhaps there is a slight echo of The Star Trek  episode : The Alternative Factor, released back in 1967

b.ii) In a dimensional corridor, a time traveller man named Lazarus encounters a version of himself from an anti-matter universe who is obsessed with killing him.

b.iii) The idea unfolds that if he and his anti-self contact each other within either physical universe outside the dimensional corridor, they would annihilate both the matter and anti-matter universes. 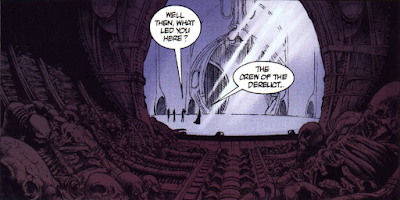 c.i) Perhaps this idea had been taken another step in Dark Horse's Alien Apocalypse comic book series from 2005, written by Mark Schultz and illustrated by Doug Wheatley.
The ideas appeared to be fragmented statements and perhaps they might have had more in mind for another story later on.
c.ii) To every force there is a counterforce
The religious maniac Dr Keitel states that to "every force there is a counterforce", and that the alien beasts named here as the "Linguafoeda Acheronsis" are referred to as "destroying angels" and it's decided that they "are sent as great balancing agents" in a bid to bring forth the apocalypse.
There had been discovered "evidence of a past extinction on a cosmic scale".
c.iii) A universal wave of extinction
The character had decided that "3.2 billion years ago, linguafoeda eterminated all life on Earth", as well as on the derelict ship found on the planetoid in Alien, that would be referred to here as Acheron, as well as another derelict ship found floating in space.
He declared them to be a "universal wave of extinction", "the wrath of god".
c.iv) One space jockey left alive scenario is similar to Prometheus
Here the alien life form had destroyed the Space Jockey as a species but one is found left alive in catatonic suspension.
It's more or less similar to the scenario that we find in the Prometheus film where one Engineer has been found alive in a state of catatonic suspension making an attempt to survive the outbreak that happened on the planetoid.
See also: Alien Apocalypse: The Destroying Angels

d.i)  As a McGuffin through numberous stories for DC comics.
Perhaps there is some co-relation to this in the Jack Kirby universe where the Anti-life equation becomes the running McGuffin through numberous stories for DC comics.
I can look at this with only have a clue about what has been said since I'm not really familiar with the stories and the ideas seem almost ad hoc and I don't really know who half of the characters are really
d.ii) As the dark half of something known as The Source.
As the years go by, the idea would come about that this equation is the dark half of an entity known as the source that came from an Anti-Matter universe.
d.iii) As a formula for total control over the minds of sentient beings,
In the comic book world of Jack Kirby's Fourth World setting, read can read that the Anti-Life Equation is a formula for total control over the minds of sentient beings, that is sought by Darkseid as far back as 1971 and it would be found as a formula found inside people's minds.
d.iv) As a living entity
In Jim Starlin's miniseries Cosmic Odyssey (1988 to 1989) for DC, the Anti-Life Equation is revealed as a living entity, which even Darkseid cannot control, and is subsequently blocked from ever entering the Milky Way again by Doctor Fate. This version has not been referred to again.
d.v) Carved into the surface of the Earth in Justice League
In in Zack Snyder's Justice League released in 2021 as the director's extended cut of the 2017 movie, it is revealed that the infamous Anti-Life Equation appears carved into the surface of the Earth 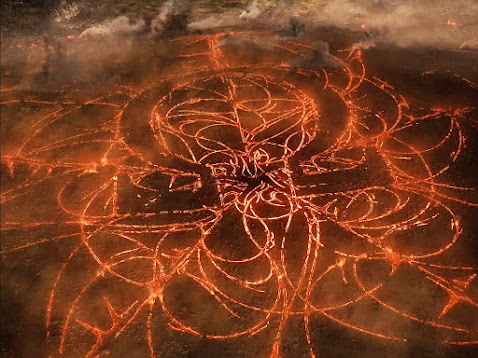