Poster for "Yardie" references “The Poetry of America” (1943) by Salvador Dali and AM Cassandre's Wagons Lits Cook poster (1933)? 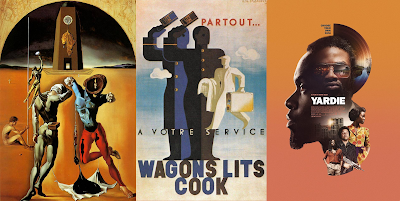 leading from
21st century works inspired by the Henu Barque? 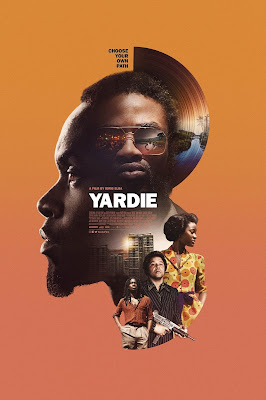 Dali's painting appears to have a suggestion about America's relationship with Africa, especially because of a soft map of Africa hanging from the clock in the back.

I understand that the background of the Yardie poster can be found with a few other colours but this background colour caught my eye and it's not really the issue here. 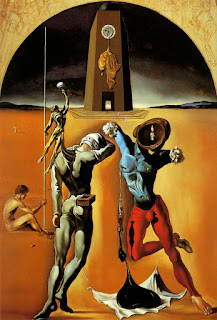 a.ii) Two images side by side, with the illustration from the Yardie poster enlarged trimming off much of the blank background. 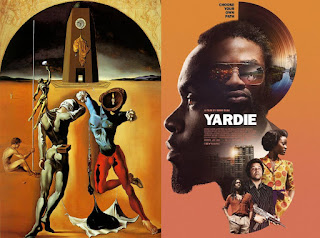 a.iii) The rear of the seated naked youth on the left becomes the profile of the man's beard. 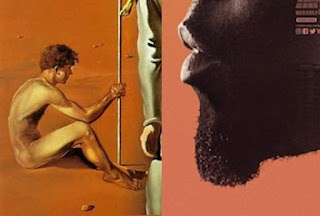 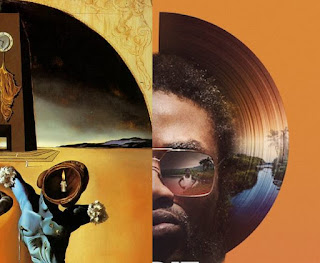 a.v) Going back to the parts that transform into the woman, a strand of cloth hands from The black blob becomes the dark striped suit and shirt of the armed man. The left of the white cloth becomes the trousers of the man on the left along while the upper left corner becomes his arm on the left, while the right side of the white cloth becomes the machine gun and the hand of the man that's holding it . The gap between the red cover upper legs becomes the gap between the tower block and the woman's head. The red covered legs might as well also become the woman's head and clothes The light reflecting on the melting coca-cola bottle might as well be the light coming from the sun behind the tower block. 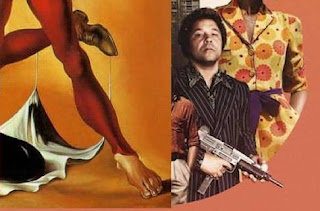 b.i) On August 30th 2018, I also had the thought that it referenced this poster by the artists AM Cassandre which is one of those posters that I think has been referenced by other artists in an interesting way around that time. It's all a bit savage to assume that I should have any clue about it but Cassandre was a leading name in good poster design and this poster artist for Yardie ought to have taken note of it without much trouble. 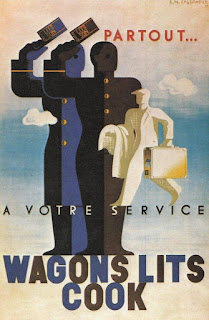 b.ii) The two posters side by side. Both display the idea of vertical divisions and something of a small scale down on the lower right. 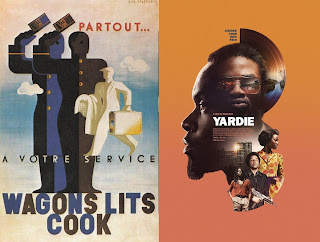 b.iii)  Wagons Lits Cook poster in reverse in comparison to the Yardie poster.

The work is divided into two colours transforms into the half of a vinyl record, and here the cloud on the left of Wagons Lits Cook seems to float into the centre be become the Yardie title.

The blue side of one of the workers's uniforms also would become the river in the background on the left, as if the figure in the Dali painting wearing the blue top and this together set off the idea.

b.iv) The white man with the suitcase, body become the group of small figures, while the grid patterns along his body, generally the ones on his upper body, become the tower blocks. Thinking about the position of the line of buttons of the giant figure of the worker, perhaps a button also becomes the sun in the distance. 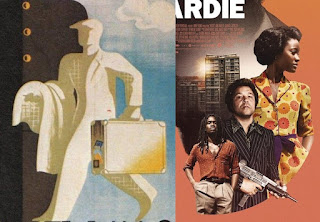 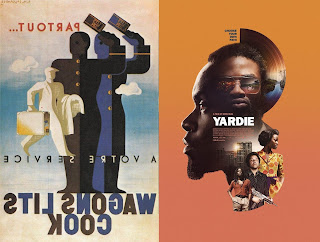