"The Treasures of Satan" path through the 1930s

Leading from
"The Treasures of Satan" trail 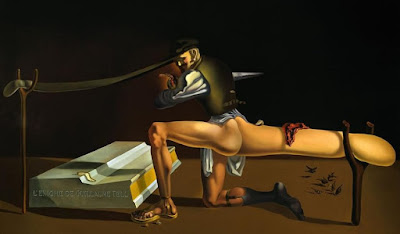 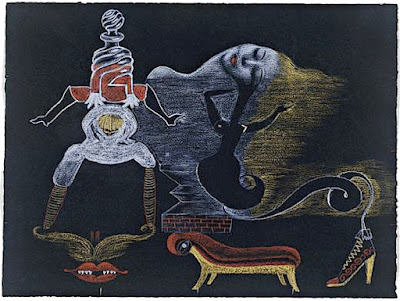 b) The naked figures in slumber are reduced to one, a sleeping woman at the top of the picture

c) The satan figure with his tail, in general are transformed into a black genie coming out of the shoe.

d) The fish whose tail can be seen on the lower left has been reflected and turned into a moustache, and the smaller fish beneath in a similar way has been turned into a pair of lips

In comparison to Dix's Skat Players
a) The central figure from Dix's Skat Players with his leg stumps with sticks attached to them becomes transformed into the man bending forwards while someone leapfrogs over him.

c) His large false eye has been given to the couch

f) The black curling legs of the table transform into the moustache.

g) The arm rest of the right chair, and perhaps the curling table legs transform into the genie's tail

c) See  "A surrealist family has the neighbors in to tea" - Cartoon from the New Yorker 2nd January 1937 by Carl Rose references E.L.Kirchner's "Studio of Painter" 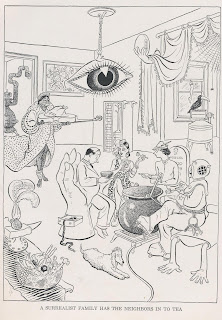 e)  Yves Tanguy's Sans titre (1937)
The idea is that Yves took note of Celebes and so in this untitled composition would play around with some elements of it.

As far as I know, it's not written anywhere, I just pulled the idea out of a magic hat as far as any one could be concerned, as with much about these paintings and I didn't have a clue this image existed until five minutes before posting the image, but was drawn to it when searching for the possibility of such an image.

Perhaps loose comparisons can be made to Guernica as well, such as the eye at the top is a reference to the light from Guernica.


f) Dali's "Debris of an automobile giving birth to a blind horse biting a telephone" (1938)
Dali takes the horse near to the centre of Guernica and transforms it in to a composition all about the horse merging with machinery, and perhaps this also echoes the curiosity of Guernica that from one perspective appears to be an elephant merged with a vacuum cleaner

See also: Dali's "Debris of an automobile giving birth to a blind horse biting a telephone" (1938)

Andre Masson paints his figure amidst the Guernica like destruction.

In Delville's painting, there is an almost triangular shaded area to the right that follows the slant of the pile of humans and perhaps he has turned that into the harp, with the devils tentacle wings becoming the upper part of the harp.

A strip of ground covered with coins and a pale under sea plant leading down diagonally to the bottom left of the painting becomes transformed by Masson into the large human's leg.

Which came first, this or Dali's "Debris of an automobile giving birth to a blind horse biting a telephone" created the same year?

Can we see signs of one in the other when we consider the curve of the left upper part of the harp that echoes the shape of the horse's rear?