"The Treasures of Satan" trail through the 1920s

leading from
"The Treasures of Satan" trail

The sea weed tree on the right of Delville's painting has been transformed into a hat stand.

Max Ernst's Celebes amongst the various things that it appears to reference, it bears traces of the Henu Barque, Treasures of Satan and Otto Dix's Skat Players. Perhaps it became referenced by various painters as well the likes of writer HP Lovecraft in his own drawings of various demonic aliens, and HR Giger.

A painting that references Otto Dix's Skat Players and so becomes part of the lineage. 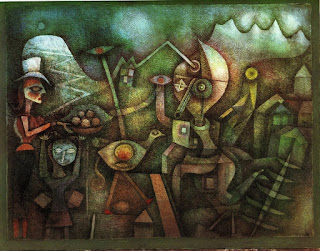 A drawing that might be easily overlooked can be found to reference the Treasures of Satan composition as well as the Henu Barque as well as others in that trail via Gauguin, Lewis,  Perhaps it has a complicated background. It would in turn be found to be referenced by the likes of New Yorker cartoonist Carl Rose and Moebius.