a) Ball gun turret
The thought came in about this painting also being like a ball gun turret on a WW2 bomber, although the gunner although come into a state of confusion about who the gun is aimed at, and has been restructured to become aimed at himself, so perhaps one might think that the character might be living in an isolated bubble, in his own own tortured thoughts. Perhaps we might expand the idea of just being like any gunner blister in an old bomber such as the nose of a Lancaster bomber. 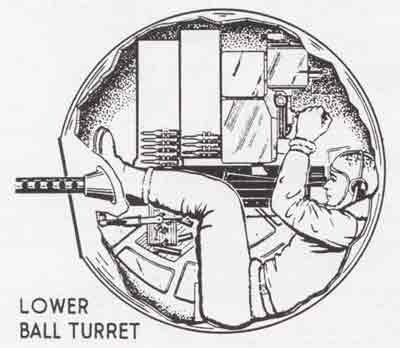 b) Rear gunner pods
Take note also of the short sliding form by the mouth and the short slides beneath the guns on the rear gunner pod of the Lancaster. Perhaps even the bulging radar pod on the Type D Turret with AGIT radar blind tracking unit fitted might have inspired elements of the central part of the large head's face, as if the pod containing the radar had been inverted turning it into a mouth, Perhaps the presence of the curved sides of the ridges either side of the pod have been replaced by the the elephant tusks