Guillotine associations
9th February 2016, I start to see connections between various forms around the edge as I if have decided that this showed some sort of an execution with a man on the right wearing a vaguely Roman style helmet. He had only to pull something that would release a man hanging upside down to his doom, or this is somehow a guillotine that has been transformed beyond recognition, it might have been perhaps something like a cigar guillotine extended with other guillotine associations such as a  guillotine used for execution or a magician's guillotine which is a compact device. 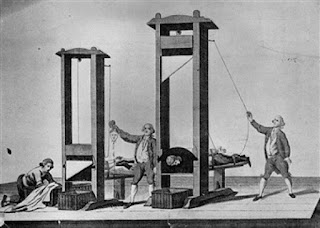