leading from
Giger's Necronom series
and
HR Giger's Art: On The Trail Of The Pink Panther

10th June 2015 : In Necronom VI we encounter a seemingly genderless humanoid with a plump semi naked body, with a plump androgenous face and a strange ornate rounded hat. His chin is divided into two testicle like lumps. The character's closed eyelids look puffed out and wears reading glasses with strange crescent shaped lenses. Perhaps the chin, the puffed out eyelids and the decoration above the nose begins to leave the loose impression of a flower such as an orchid or perhaps more likely a snapdragon.

The feet are strangely cloven, perhaps a satyr or a remnant thought of a Goya image of a seated goat.
A pipe is connected to the genitals, is it a leaf blower or vacuum cleaner nozzle, spews out demonic deformed thalydomide babies wrapped in a membrane like a sausage skin.

27th of June 2015:  My mother suddenly decided to buy a leaf blower, and she has never bought one before and so I will go with that general concept

b) Post Jodorowsky's Dune thoughts.
We might take a look at a drawing for the character Baron Harkonnen by Moebius for the movie project Dune by Alexandro Jodorowsky. HR Giger had been Jodorowsky to design the world of Giedi Prime ruled by Baron Harkonnen . This character was to be a bulging fat human who wore ornate headdresses, and in one of Moebius' drawings he appears nude wearing a bulging cap and a necklace. The head of the character in Necronom VI and the naked drawing of Baron Harkonnen with his puffed out hat  and necklace are almost similar.

c.i) On February 23rd 2018,  here I am again pulling another thing as it were out of the ether, but I had pulled out of my magic hat the idea that Giger had found inspiration in the early Pink Panther comic books and then realised as if I knew it all along that these comic books incorporated elements of Egyptian images, and here we have in the comic book story a scene that with other parts of the story transformed elements of a star map from an ancient Egyptian tomb. 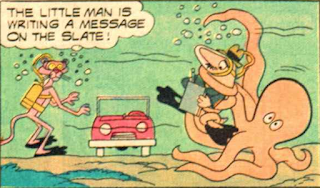 c.ii) The raised tentacle has become the leaf blower,

c.iii) The octopus head has become the upper torso of the seat human and then again the head of the human with the head dress.

c.iv) The lower two limbs together of the creature have become a single leg with a cloven foot that looks as if it has been split through the centre.

c.v) The man's face with the diving mask on has been replicated and transformed into mutant demonic faces in a sausage skin coming out of the leaf blower pipe. 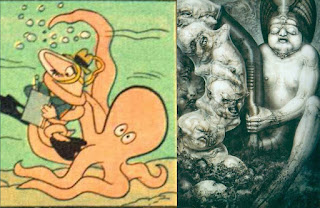 d) Necronom VI referenced in the structure of Poltergeist 2's The Great Beast
What this painting would later influence because of the strange twisted characters coming from the pipe, the totem pole part of the body of the great beast, design by Giger for the movie Poltergeist 2
(See: Poltergeist 2) 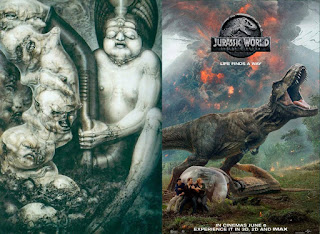