leading from
J G Ballard
and
Photograph of JG Ballard in 1969 or 1970 for Issue #1 of Jannick Storm's J.G. Ballard newsletter, Limbo
and
Giger's Alien Monster IV


a) Identifying a familiar face
Having noticed that Giger seemed to incorporate ideas to do with the Lord of the Ring's Gandalf's battle with the Balrog at the bridge in Moria and he was also referencing Joan Wyatt's painting of the Balrog which seem to be loosely based on Delville's Treasures of Satan. (See Alien Monster IV; Atrophied remnant of the battle between Gandalf and the Balrog in Moria (alien hand as whip) Then there's a question of a human face in there to be recognised, I briefly wondered if it was Tolkien's and the answer is "no!".


b) Balrog connects with Ballard
I thought about the word Balrog and that Ballard being the nearest name to that might be the face in Giger painting simply because of the word association,

c) Sideburns become pipes
I took notice of a  1970s photo og Ballard that in its printed form is rare published in Issue #1 of Jannick Storm's J.G. Ballard newsletter, Limbo see: http://www.jgballard.ca/deep.../storm_limbo_newsletter.html), and only a serious collector would have managed to get hold of it but it shows JG Ballard with his mutton chops/ sideburns on display and I think the pipes at the left side of the painting are Ballard's sideburns, and the thing with the glow worm coming out is the line at the side of the mouth. How serious a Ballard enthusiast for Giger, or did he know someone else who was?

d) Collar becomes a worm
The collar of the sweater/jumper. with vertical ribbing would become the crescent shaped worm

e) Ribbing on shoulder becomes a ribcage
The pattern on the crease in the shoulder on the right becomes the ribcage for the alien creature.

f) Mouth becomes a pelvis
The creature's pelvic plate represents the part of his chin above the dimple and the shape of the mouth perhaps merged into one. 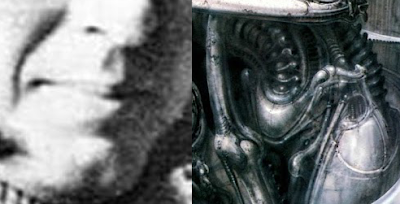 g) Nose becomes the arm
Giger would have accentuated the features of the nose, making the bridge into the upper arm, the very tip of the nose into the elbow, while the under part of the tip extended becomes the lower arm and the curve of  the nostril becomes the curve in the wrist.

h.ii)  With that the hair line also becomes the neck of the beast with the ear becoming its head. 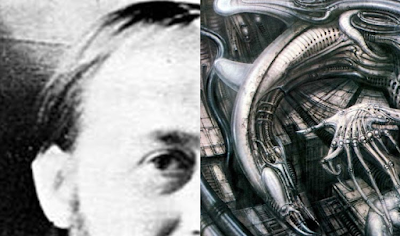 i) Afterwords
Is this enough evidence? Can there be any further evidence found? Possibly not. It is so abstracted as a face that perhaps it's not ideal to claim that is supposed to be anyone's face at all but ask if Ballard's photo was used as reference.

What would Ballard's image be doing there? Well, Giger admitted to being a fan of his work and oddly it was hoped that Ballard would novelise the film, but Ballard decided that he didn't like the script.