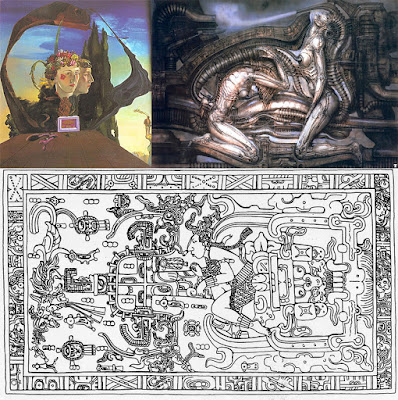 
a) Continuing with the exploration into Giger's Necronom V, showing a female figure with the head of the Alien, riding on a piece of apparatus being inspired by the design of Pakal Votan's tomb lid, one might look at the painting Erotomechanics VII which shows two female figures seated opposite each other on an alien head, inside of something describable as an iron womb. Mia Bonzanigo and a friend of hers both posed for HR Giger and now polaroids have been released, it can be seen that they posed with the actual head of the Alien suit and the tail as well, trying out several different positions before settling for one that mysteriously echoes the Pakal Votan tomblid

b) One can ask if this is also inspired, even if only loosely, by the Pakal Votan tomb lid, as we see the cutaway womb like shape  encapsulating the occupants with an engine device to the right against. The serpent bar coloured in pink here transforms into the crouched female on the left holding the ribbed tusk over her head.

c) Giger's work in Erotomechanics VII became a starting point for work 444 , Biomechanical Mia, Egyptian Style. The crouched female figure on the left transforms into the head and forearms of a winged Sphinx creature. The style of the background shows similarity to the New York City series that would soon follow

d)  References Dali's Portrait of Portrait of the Viscountess Marie-Laure de Noailles (1932)
Looking through a book of the work of Salvador Dali on the evening of February 25th 2016, I suddenly realised the curious shape surrounding the painting of the head of the Viscountess Marie-Laure de Noailles bore a resemblance to the Erotomechanics VII. The facial profile transforms into space before Mia's stomach in the painting. The tip of the elongated spoon sticking out of the pork shop on the right becomes a pipe with steam blowing steam. The leaves from the planet sticking out of the left side of the central head transform into the left woman's back in Giger's painting. The features of the framed image at the bottom of the Dali picture become integrated into the bottom where the platform on which the two women are kneeling. The trees on the right within the shape transform into Mia who's face is near the gap where the pipe directs its steam 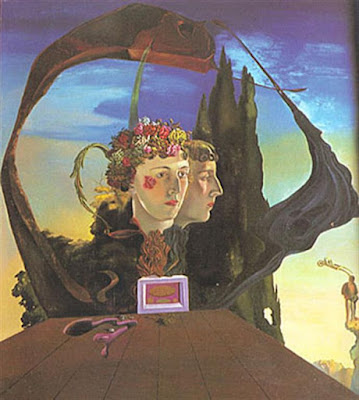 e) See  MReferenced in an illusrtion by Moebius for Jeunesse Heureuse

f)  See: Referenced in comic bok panel showing the character Darkseid holding a mother box as he tries working out the Anti-Life equation from Saga of the Swamp Thing Vol 2 #62 (Published 1987) by Rick Veitch and Alfredo Alcala?