However Giger was interested in what kind of paintings the man made, but it was many years before he was actually able to see them.

He managed to get a copy of the catalogue produced for the Crowley art exhibition that was held in London in 1998 and a catalogue for the Berlin exhibition in 1932.

Most of the works he'd seen were portraits of Crowley's friends who he made look very evil.

The paintings of the ladies were also very terrible looking, which was very different from the way that Giger did his, as beautiful goddess.

b) HR Giger's Explanation
The main focus of this painting is Aleister Crowley whose portrait dominates the left part of the painting, based on an elderly photograph of him when he created a sensation with his exposition of paintings at the Gallery Pforzheim in Berlin. The pointed hat , Giger was able to state, represented Crowley's first ascent of the K2 mountain in the Himalayas, and in his hand is an ice cream cone which is an inverted version of his hat with a humanoid face on it, representing Crowley's dogma, such as "belows as above" or "Macro-Microcosmos".


c) References the Shivalingam?
Next to the Crowley figure is a humanoid facing down and upon the top of his head is a traditiona shivalinga, a representation of Shiva the hindu deity to be worshipped in temples. In traditional Indian society, the linga is rather seen as a symbol of the energy and potential of God, Shiva himself.  And this became an interest in Crowley's occult practices. The popular belief is that it represents a phallus and then obviously it looks as if there is a vaginal shape around it, but according to Swami Sivananda, this interpretation is a grave blunder and the shape is supposed to represent an egg form rather than the phallus that it has often be interpreted as. He made the visit to the Meenakshi temple, Madurai, to see the sacred Shivalingam there.


d) References "Nameless Novel" from his collected book of writings "Snowdrops from a Curate's Garden" published in 1904: 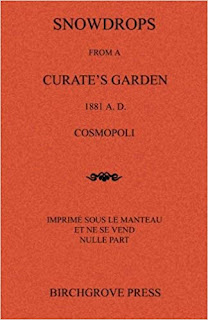 The seven balls spinning in the air perhaps originate from chapter 2 of Aleister Crowley's erotic  "Nameless Novel" from his collected book of writings "Snowdrops from a Curate's Garden" published in 1904: "But the Archbishop’s vanity was aroused; he saw that I was losing interest in himself; and this was no part of his plan. Dashing into the arena he frigged himself violently into the air, catching the gobs of sperm with great dexterity and tossing them up like a juggler, while moulding them little by little into a solid mass. He did not stop until (in one hundred and eighty two orgasms) he had collected seven balls of about four ounces each, which he kept gaily spinning in the air, and then hurling them with unerring accuracy at the exposed cabbage-patches of his numerous lady friends. “Come” he said, rising, with a sad sweet smile, “to our reminiscences! This is weary work.” (http://hermetic.com/crowley/snowdrops-from-a-curates-garden/)

e) References a photo of former prisoners of the Buchenwald Nazi concentration camp from 1945? 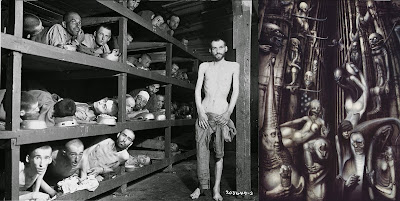