leading from
HR Giger's art.
and
Concept art for the stage III Alien


a) Giger's second version of the stage III of the man in the suit alien paintings were of the creature with a pale elongated insect like human body. (see also: Alien: Jack Kirby's Living Totem as reference for the alien suit)

b) Alien III (Side view II)


b.i ) The first state of the design comes as an evolution of Alien III Side view 1 which we still only have a low resolution image of. Here tongue resembles a leech with a corkscrew drill at the end.

b.iii) See: Alien: Alien III (Side view II, first state) by HR Giger references panel showing the hallucination of a Pharoah reaching down to Tintin from "The Adventures of Tintin and The Cigars of the Pharaoh" by Hergé, as published in La Petit Vingtieme #4, January 1933 ?

b.iv) See: References photograph of JG Ballard from the Radio Times, advertising the BBC program Omnibus that was televised on the 13th December 1973?

c.i) Another stage in the evolution

Further into the evolution of the design, the form of the creature's body becomes more recognisably humanoid.

The new design for the tongue starts out as elongated and curved up at the end, the shadow part of the tongue in this terrible photo glimpsed in the Alien Evolution documentary makes it look like an Egyptian brain hook for debraining corpses in the mummification process, although it might have simply looked like a baguette sticking out of the creature's mouth.

But later in the development of this painting, the tongue became tubular with a sharp point on one side and a protruding spine sticking out ready to puncture its victim.

c.iii) See: Depiction of goggles and their relationship to extra-terrestrial Greys and perhaps Egyptian Lotus Blossoms 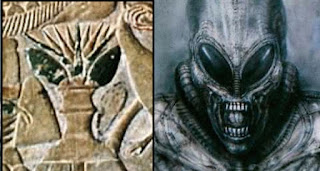 c.iv) This alien had no dome stretched across the cranium, or if it has, the goggles and the spines at the back are sticking out of the dome.

c.v) And this one has only five digits on its hands. The feet look as if they have an extra segment to each digit on the foot following Giger's usual methods of elongation 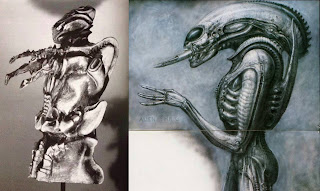