leading from
Physicality of the humanoid Alien creature 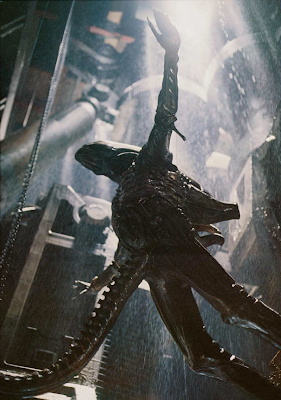 a) Working with Ridley's fragmented impressions
a.i) Ridley  abstract words
Ridley was a man very approachable and down to Earth.

Ridley was always trying to grasp words to describe verbally what he wanted in terms of picture and then he'd get frustrated and just grab a camera to do it himself .
Ridley would come out with statements such as a "no, I want is er, you know I want these umbilicals, all hanging you know, like you know an aliens 'umbly',"

a.ii) Guy Hudson does impressions of Ridley
Then Guy Hudson who was one of the younger production members of staff who liked to poke fun at people.
It got to a point where he would start behind doing impressions of Ridley behind his back "what I want is these umbilicals and the like alien's like fucking you know hanging there, you know".

a.iii) Ridley's tolerance for Gyt's humour
Someone pointed out, "Ridley's right behind you" and Ridley was there.
Jon Sorensen saw how he accepted this behaviour without complaining, and so appreciated the way Ridley was able to handle this, although Guy knew that he had been caught out.


b) The Umbilical
b.i) Intermediate stage
Asked about the creature's intermediate stage, Ridley talked about the alien's tale being referred to as an "umbilical"  but it was not so much a tail in his point of view but a muscle of immense tensile strength.
He wanted it to seem to look like an umbilical cord most probably more than a phallus. and it was in the scene where the creature comes down from the inside of the landing leg and kills

b.ii) Brett's death
He had to make sure it seemed like an umbilical cord for the scene where the alien was suspended in the air in the shaft and the tail needed to hang down if the tail was going to suddenly come down between Brett's legs to pierce his spine. 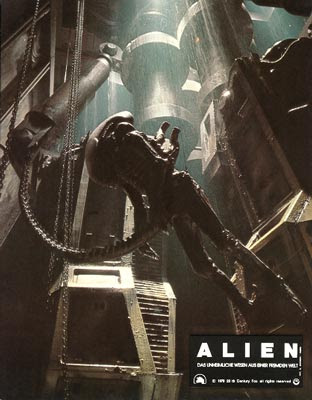