leading from
HR Giger's ZDF (work 433) (1980) references ceiling decorations
from Temple of Hathor in Egypt via the cover of Tomita- Bolero?
and
the cover artwork for Tomita - Bolero (released 1980) by Barron Storey

After Isao Tomita's death on the 5th of May was reported on the 8th May 2016. Days later  on the13th of May 2016, I suddenly realised that Tomita Bolero album cover was being referenced in ZDF, a woman holding a long elongated object, perhaps the bars of music,  amidst the wavy forms that could be a river in a virtual landscape.

This use of the album cover I believe also connects with the use of the ceiling of the Hypostyle in the temple of Hathor, which presents a mythological star map 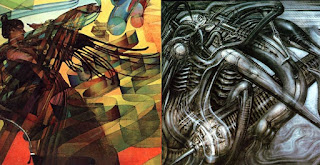 d) Waves and curved organic form with ZDF letters written on it, while the long strands of fabric become the arm reach down to the right. 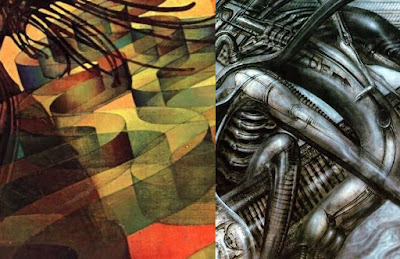