a) Realisation
August 1st 2015, while thinking about the Pakal Votan tomb lid as ever , I took a look at the long device stretching from the lower left to the upper right and noticed that at the bottom was a face near the top are the arms of a T structure then I decided perhaps it was loosely inspired by the world tree from our the Pakal Votan tomb lid minus it's elaborate patterns.

Elements of the tomb lid have been found in Giger's works Necronom V (1976) and Giger's Erotomechanics VII (1979).

Perhaps I wonder if it supposed to be a sword in a scabbed with a humanoid face on the end, but a world tree is a possibility especially because of the head at the bottom of it, although the face of the Sun God at the bottom has been transformed into a face less indentifiable.

The biomechanic pilot sits loosely on the vessel entangled within other biomechanic forms yest to be interpreted.

Because of the fascination with Erich Von Daniken's idea that the picture depicting a space rocket and pilot, Giger would perhaps have been looking at the picture on it's side with Pakal looking as if he is sitting up right.


b) Exploring the blind bloated creature
However the strange test bloated blind creature with sharp teeth that reminds me of a mole rat held in the palm of the outstretched hand has the split tale like that of the cosmic bird that sits at the top of the world tree in the tomb lid. 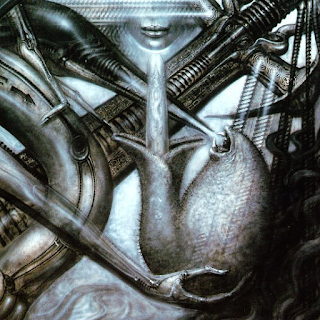