Alien 3: Curious Similarities between
Element of Crime and Alien 3

Leading from
Alien 3
and
Haven't a clue about Bishop 2

a) Odd Similarities with Element of Crime
a i) When I first saw Alien 3, I was slightly disappointed by its unfinished and fragmented nature,  I thought that I saw a review towards the end of its run that compared it to one of "Tarkovsky's opium fueled hallucinations" and suddenly thinking about the work of Tarkovsky put me in a better view about the movie in that it was more or less an abstract hallucination, but looking back through old Starburst magazines I saw a review by Kim Newman for the movie that suggested that the movie was like Tarkovsky on valium and it may well have been that which I read.

However around the turn of the millenium, I was informed about the movie "Element of Crime" by Lars Von Trier and how there were some things in it similar to Alien 3. Element of Crime was released in 1984. And then I later discovered that this movie had been partially inspired by the works of Andrei Tarkovsky, and I suddenly began to make further links with Alien 3. 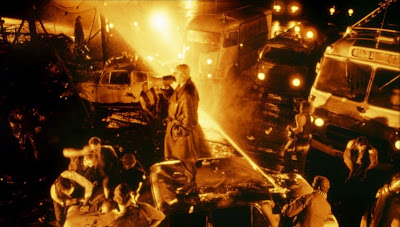 a ii)  Abundance of bald people
Alien 3 had an abundance of bald people as did Element of Crime including its director Lars Von Trier who appeared in a scene bald as a hotelier, and a main vicious character is a bald man, in Element of Crime it is a brutal police chief Kramer, and in Alien 3, it is the prison warden Andrews.  However it seems as if Kramer is supposed to remind people of the Brando character in Apocalypse Now and indeed we know that Fincher wanted to make Alien 3 as a sort of Apocalypse Now.  A given reason for the people in Alien 3 being bald is because they need to shave their heads because of the lice around the prison complex.

a iii) Child Killers
The lead character Fisher is hunting a child murderer named Grey, and in Alien 3, a percentage of the prisoners in the film are child killers

b) Mysterious Creature in the hole
b i) Alien in a hole
In Alien 3 a prison inmate Murphy shines his light on the young alien hiding in a hole in the floor of an airshaft, he looks in and the young alien spits acid in his face sending the Murphy to his doom torn to pieces by a fan blade.

b ii) Loris in a hole
At the end of Element of Crime, Fisher's way out of the world is through finding a lid with a hole in the ground, perhaps a sewer line, where he finds a loris, and asks to be woken up from the hypnotic state. While it would be hard to connect the two completely, they both appear to be holes in the ground that  and both contain a surrealistic creature that brings an end to the role of the character looking inside the hole.

Quote source
c) Lars von Trier sees the similarities
c i) Years later Lars Von Trier himself was able to see the similarities between his Element of Crime and Alien 3, one thing to take notice of was its cinema photography and indeed this film was made near enough in his style. But a beach with an abundance of lamps that might have reminded some viewers of the lamp bulbs in the beach scenes and also there were cranes.

c ii) A thing to stress is that Element of film payed homage to Andrzej Tarkovsky movies, Ridley Scott's Blade Runner and so it was noted by fans, Coppola's "Apocalypse Now". David Fincher wanted to make Alien 3 his " Apocalypse Now" when he pitched it to the studios, he did not expand on what this was all about to the magazine interviewers, and Blade Runner's cinematographer Jordan Cronenweth was initially involved in Alien 3 and the cinematographer who replaced him continued with the ideas that Jordan Cronenweth started for the film. Thus there are some circles to endlessly go around in.

c iii) However, when it came to making the following Alien film Alien Resurrection, Jean-Pierre Jeunet would openly cite Lars Von Trier as one of his influences for the movie although this would not be the movie that Lars would be comparing to his own


d) Bishop 2's intentions falling apart like Fisher of "Element of Crime"
d i )The lead character of Element of Crime Fisher is there to hunt a child killer, but by the end of he has found himself turning into a child killer despite his best intentions.  Perhaps that was slightly like the way that in Blade Runner, Deckard intends to hunt Replicants down and then in the story, whether he was supposed to be a replicant or not, now he has become one

d ii) Bishop 2 from Alien comes to Ripley seeming to have the best intentions, he intends to have the alien queen removed from her and killed and allow her to start a new life, and he claims that he himself is not an android, but the progenitor of Bishop the android. However he wanted the alien queen specimen to learn from and surely he would have only wanted to create more aliens from it
Perhaps whoever or whatever he was, with the side of his head opened up, the big question still arises about whether he is a human or an android. ( See also: Haven't a clue about Bishop 2 )