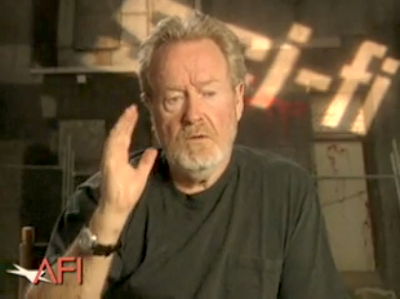 a) Ridley at an AFI Q&A spoke and about an intermediary stage of the alien, to give an idea about how in its life cycle, it would turn into something the size of the final alien creature. He described a black egg shaped form with legs that unfolds which he never quite got around to do.

b) With the mention of some sort of compact shape and the alien unfolding, some might want to cast their minds back to the scene in the Alien comic book which showed in a corridor the alien squashed into a box shape when Ripley is trying to get to the shuttle and finds it between her and the shuttle, and this creature unfolds until it's standing as the tall adult creature. Were the two concepts one and the same or just similar?

c) See also: The Alien as a folded up box