leading from
Prometheus: The Question of The Space Jockey As A Suit

a) Fire In The Sky (1993)
In 1993 the movie Fire In the Sky was released, the script written by Tracy Tormé who tried to depict as near as possible the events surrounding the Travis Walton alien abduction UFO case and this movie brought up the same idea about what we perceive to be extra terrestrials, that they're suits with something inside them. The space suits in Fire In The Sky might well be considered a nod to the film Communion and also a development of the idea shown where something else was shown hiding within. 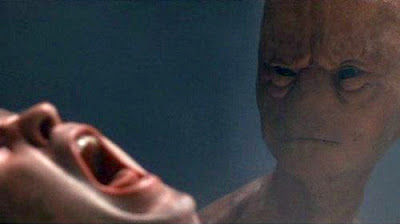 b) Changes to the script
One day while in preproduction for Fire in the Sky,  Tormé received a phone call in his office at Paramount Studios, it was a studio executive who just happened to have seen the second airing of Intruders on TV the night before which Tracy Tormé had also scripted, and was saying "Oh my god, the same kind of aliens that are in Fire In The Sky.Oh my god, they've been shown before, they've been on this movie Intruders and we're sunk, we can't do the movie "

The executive was unbelievably put-off and worried because he’d seen little gray men with big eyes standing over a table doing experiments on someone, therefore it’d ‘been done before,’ therefore he had no interest in doing the Walton movie and was going to kill the project if I didn’t come up with something else. This sort of thing had also been seen in such things as Communion, the Betty and Barney Hill abduction case, on Nikon commercials and beer commercials. The studios were going to need the alien sequence changed for their 20 million dollars or they would pull the plug on the production. They were serious and firm about the matter.

Tormé was shell-shocked and so found himself and the director having to convince Paramount a second time to make the movie.  He had no other option but to go back to square one and re-write the abduction sequence, but perhaps it was an interesting idea. Tormé got together with the director and Travis Walton and devised a sequence that would be seen in the movie at least attempting to maintain the essence of the encounter by mirroring the real occurrence, although it seems that Travis himself was not involved in the discussions about the alterations to the scenario, and when he came to see the alteration to the alien scene, it came as quite a shock to him

One idea was that when Travis said he had had trouble breathing when he came to in the strange spacecraft environment, and so in the film, he would have a mask over his face. Tormé would understand from very early on that the fictionality of the scene would upset the UFOlogist community.  Tracy Tormé came up with a visceral interpretation of Walton's abduction that in a clever way became an idea about a perception regarding these alien beings, that what we saw as typical greys were space suits and maybe there was something else inside them and here there were some strange almost humanoid aliens as if born out of the need to find the zipper entities on these little Greys and pull it down and see what's really underneath because there's a sense that there's something artificial about a lot of them 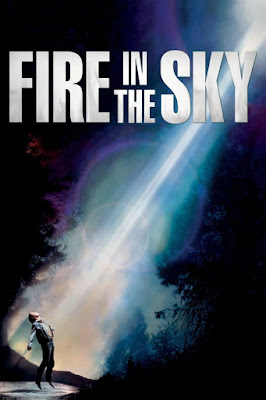 c) Flight suits in the ship
Empty Space Jockey like suits of the engineers curiously found standing either side of a tunnel leading towards the space jockey chamber in the Juggernaut. Oddly in the film, these Engineers are seen to be running around in these suits, they're labeled as flight suits, but they're not used for flying, and the space jockey suit that the pilot used to fly the ship is a part of the chair. Perhaps they're just used as environment suits in this case, protecting them from being infected. 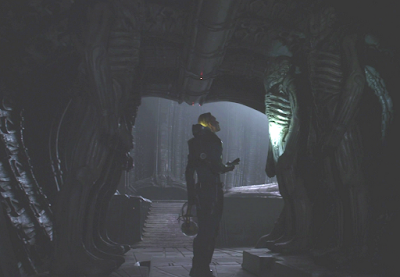 d) Fire in the sky suits
Below, Images from the movie Fire In The Sky (1993), directed by Robert Lieberman which is based on the Travis Walton alien abduction case, here the character Travis Walton wakes up in a space craft and curiously encounters space suits of extra terrestrials floating around inside a zero gravity environment, presumably the inside of a space craft. It suggests that all the witness reports of what are known to be "Greys" may not be all that they seem, maybe they are suits and something else is inside them and what are revealed to be the actual alien creatures themselves shows something roughly humanoid but significantly different. And this scene brings me to make the connection between "Fire In The Sky" and "Prometheus"